So, the third of my back-to-back jam onslaught (here's the first and second) was the Manchester Game Jam. We're almost there, stick with me.

Once again Madlab were our gracious (and f-f-f-freezing!) hosts, and we dropped lucky that day and had the place to ourselves. This was the first of our monthly one-day jams, to run alongside the big Ludum Dare jams. The feedback we had was that people couldn't always commit to a full weekend, and also that once every four months just wasn't enough game jammery. So, a monthly jam seemed like a good call. Thankfully, our jammers agreed! 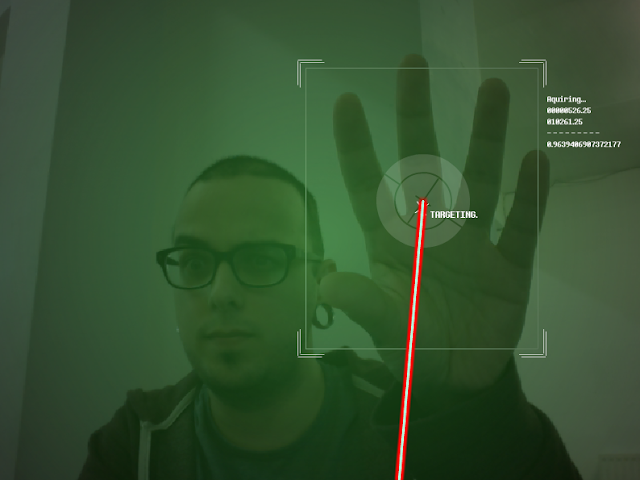 Full photo run-down after the cut. 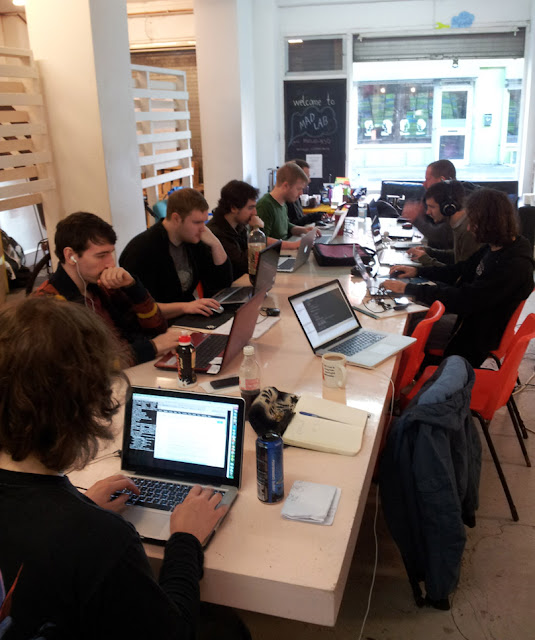 The format was pretty much the same as the Ludum jams, in that we didn't make any rules! Apart from, of course, the one golden rule: success or fail, you have to share your work at the end. No pressure.

We also picked our own theme at random and announced it in advance, so people had a bit of thinking time. The theme we picked was LASERS, and it spawned some pretty awesome games. Check 'em out: (oh, and I'm terrible with names so please own up if you want a link and credit on here!)

This asteroid-blaster was built in XNA, and was one of the two (I think) games that had music produced for it on the day. We definitely want more audio guys on board for future jams: 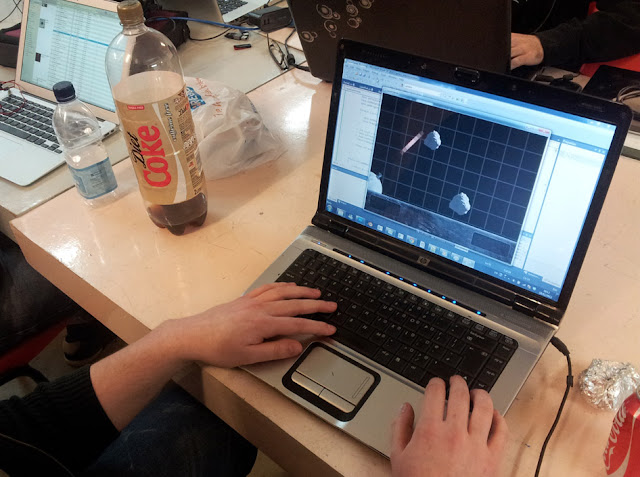 Dave's idea was all kinds of cool: a webcam tracking a laser pointer (the most literal theme interpretation of the day) to control a little shooter. Hold the laser over a gun to charge it (literally fire the laser pointer at the screen), and aim it outwards to fire. It needed occasionally fine-tuning, but for about a fiver's worth of kit it turned out pretty great: 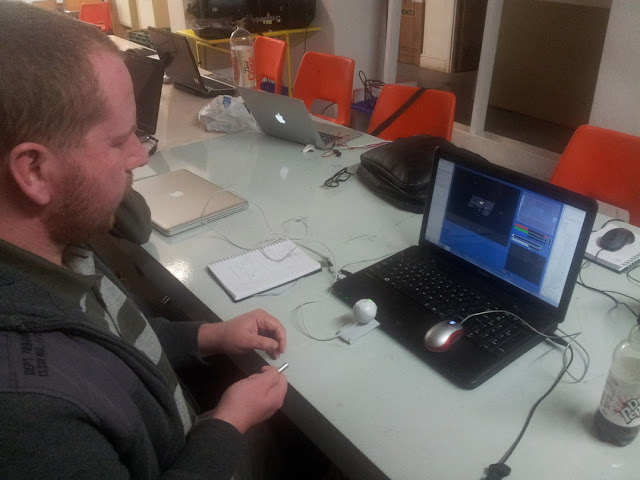 Mark's game was the first of our two games built in Python/pygame, where the lasers sweep the playfield in random spreads and you have to avoid them. Looked like a pretty cool mechanic, reminiscent of Super Hexagon but less eye-melting: 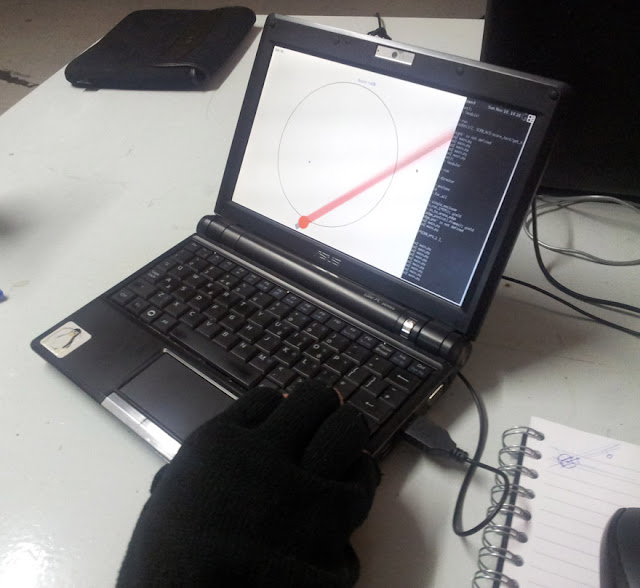 Tim put this together in HTML5/javascript, and even rolled his own physics too. It looked great in motion with loads of enemies swarming, and the performance looked great: 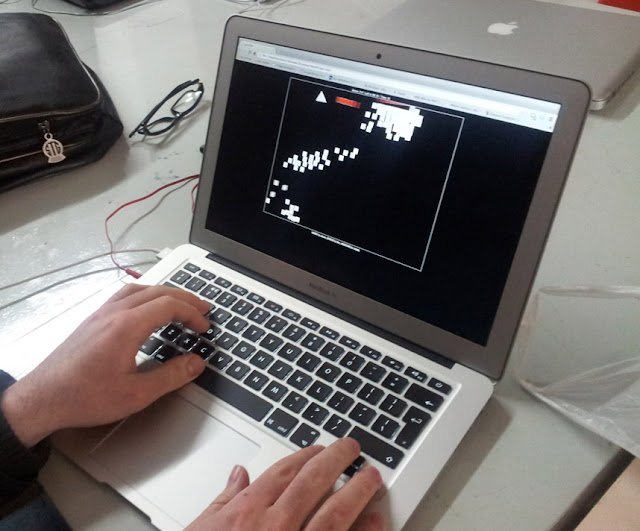 Jana of Larkin' About ambitiously decided to not only learn Python/pygame, but also collaborate with her friend Iwan in Berlin (who in fact organises a gamejam over there. Hi!). They stayed in constant contact all day over Google Hangouts, and made a sweet little colour-switching game where you had to redirect and change the colour of moving elements (I guess these would be lasers in the end?). Turned out really nicely: 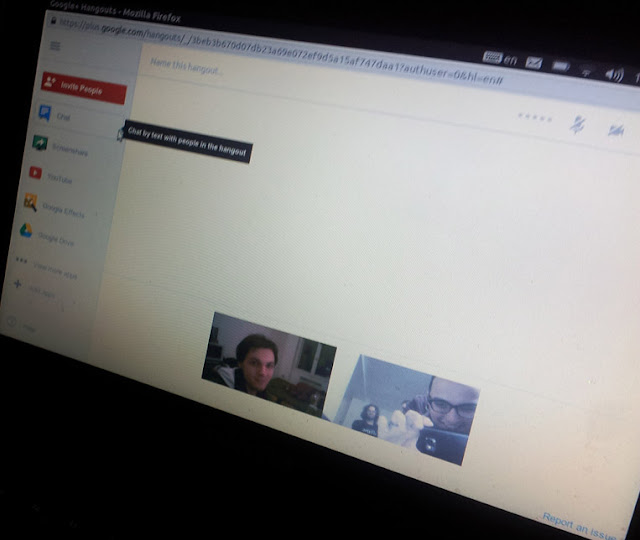 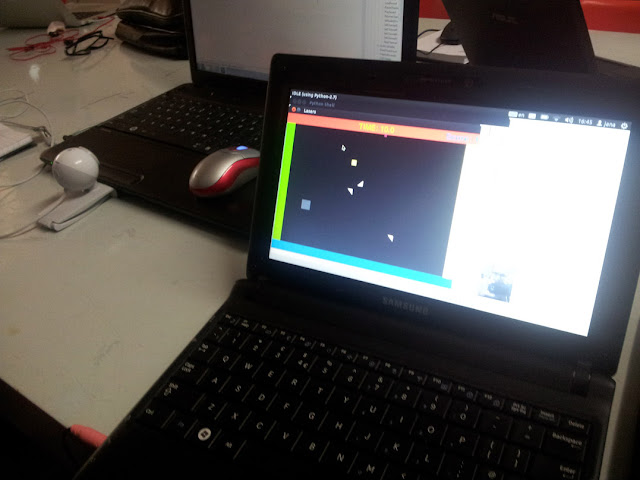 Obligatory shot of Clawhammer Mark's ongoing project Chroma, which by pure coincidence now features LASERS! This looks more and more awesome every time we see it (and if we're not mentioned in the credits there'll be hell to pay!) 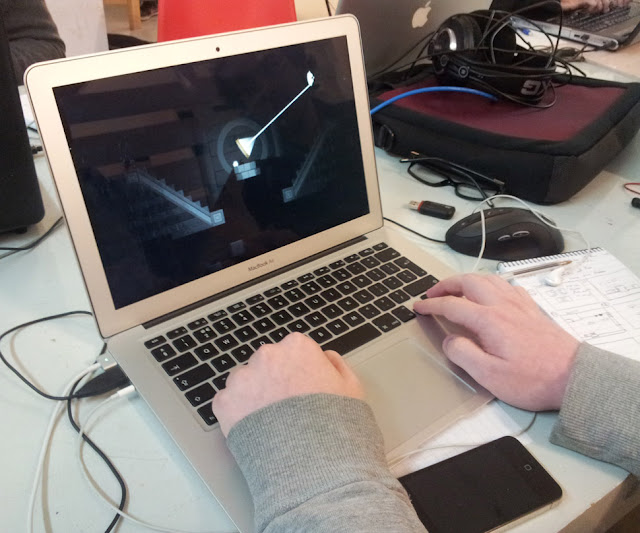 The thing I made ended up being more of a silly tech demo than anything else, which considering the state I was in after about a week of solid jamming was about as much as I'd expected to make really... My initial idea was to make a little webcam game where you dodge lasers. Ended up being a bit boring, so I noodled with it, whereupon it became slightly Terminator styled, and then became a chance to shoot lasers at wherever it detects motion. Hmm. 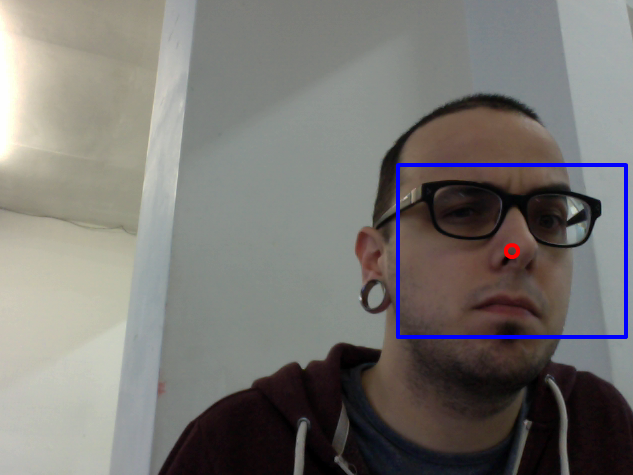 Terminator overlay (no idea where I was going with this, but it was fun!): 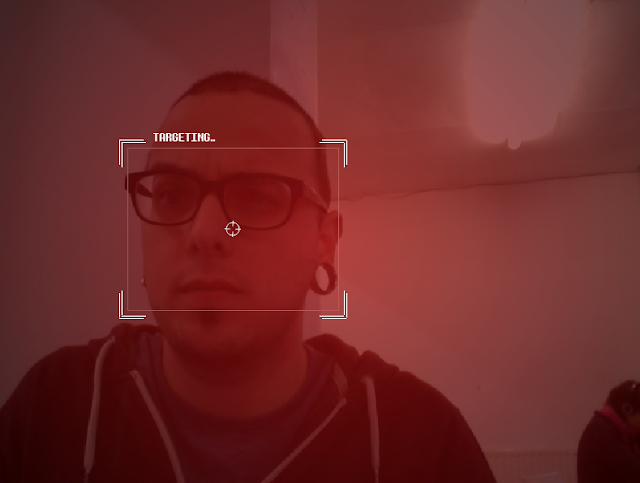 Then I improved the accuracy a bit and added a laser firing mechanic when you press the spacebar. Ideally I'd like to have enemies flying around that require you to follow them with the laser to destroy them, but that's for another day:

The tech demo is playable here, it's best played in relatively decent light. Definitely room for improvement, but it's kinda cool I guess. Oh, and here's my newest playtester! Hi! 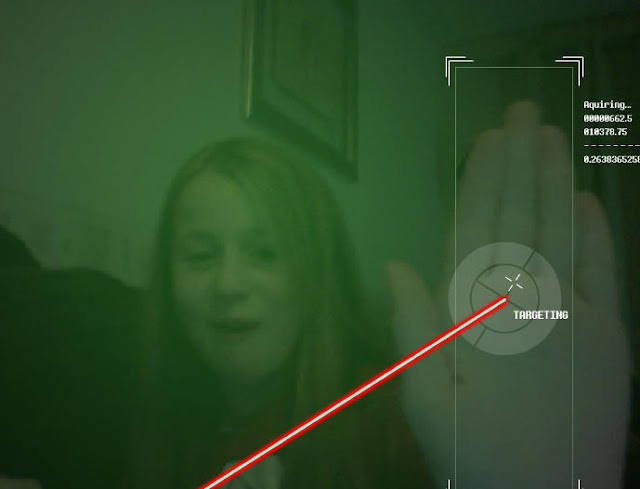 And so ends my triple-whammy of jam events. Time for a bit of a break from programming I think...

Actually, the next thing I'm going to be doing is adapting our FuckThisJam game into something a bit larger and more playable. The core is there and we only just missed finishing it, so it makes sense to whip that into shape and get it released. It'll definitely be a rebuild, but shouldn't take long. This will be the first big project I've used Haxe for too, so it should be a good learning experience.

Then, once that's in the bag, I can start looking towards the sci-fi craziness that I'm cooking up with letsbrock. It's been on the back-burner a little for both of us, but we've had some awesome ideas for it.

So, to summarise: I'll sleep when I'm old!