A couple of days ago I did some live visual work at a really awesome chiptune event in Brum - uChip3, curated by the ever-awesome hellocatfood and 2xAA. 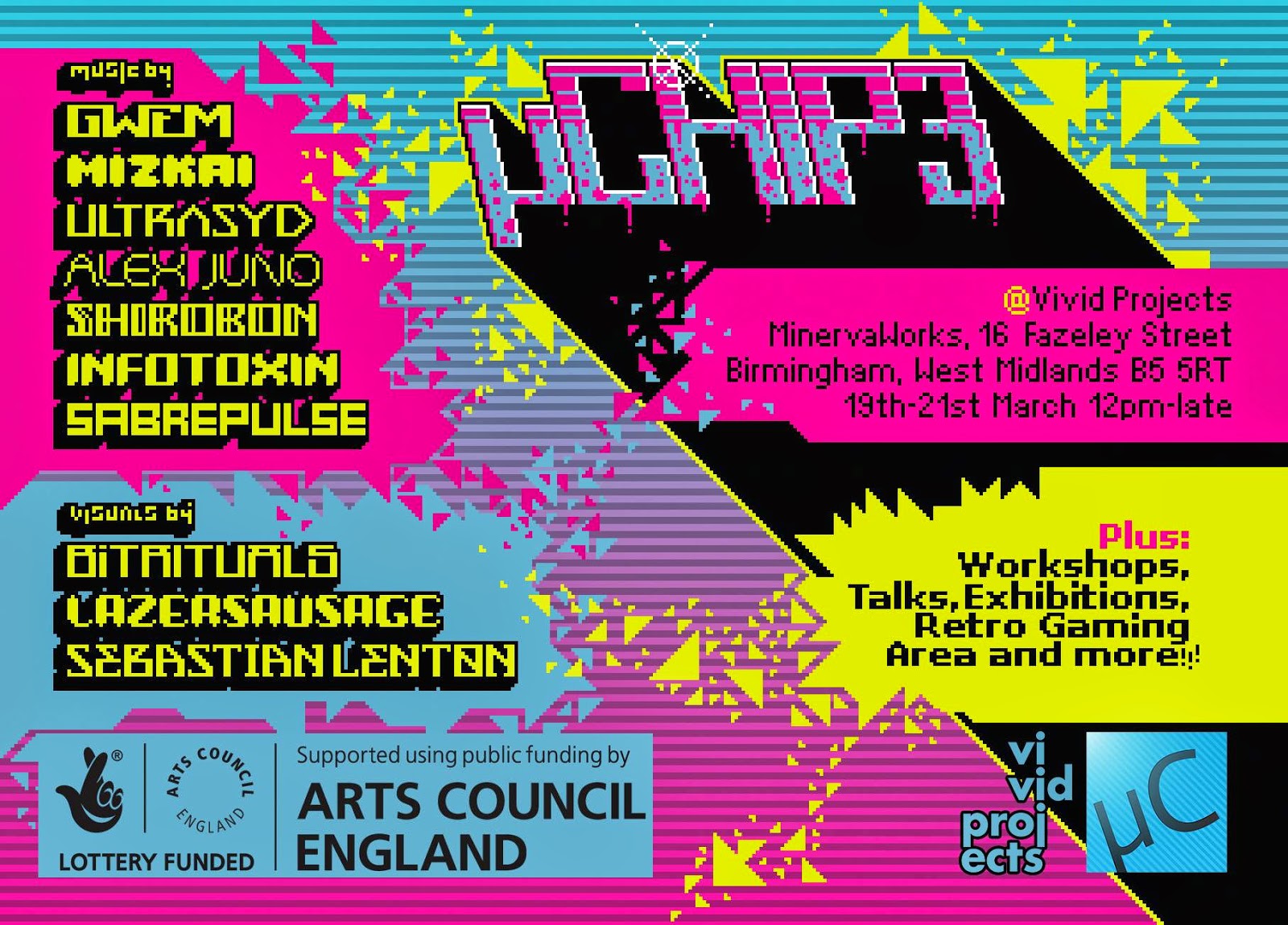 I had chance to do sets for two artists - initially the plan was to work with Mizkai and Infotoxin, and I knew in advance and so had chance to do at least a cursory amount of prep work (mainly grabbing logos and setting up my livecoded visuals to give me a bit of a headstart). Of course the best laid plans tend to go tits-up at the drop of a hat (that's how the saying goes, right?), so I ended up doing visuals for Mizkai as planned and then switching and doing Shirobon's awesome set at the last minute.

The other guys on visuals were all kinds of great too - I love working with people who are doing completely different stuff to me within the space, and it's safe to say both did. Lazersausage threw down this amazing home-grown Processing work via some killer VDMX setup and lit the place up beautifully, and Sebastian Lenton pulled out some awesome javascript physics work which looked unreal, really neat approaches from both, and very inspiring on both counts too! Also it's worth highlighting Sebastian's killer last-ditch coding under pressure to get his setup working on my machine - I'd have thrown the towel in and hit the bar, but he got it singing just in time. Kudos.

There were a few hitches for me, the big one being that my switch from Infotoxin to Shirobon meant I had a ton of Infotoxin's logos (and even names etc in the code) all over the place. I managed to kill it quickly-ish but embarrassingly was drunk enough (and kinda focused on what I was doing) that I forgot I'd switched artists for a few minutes until someone gave me a shove about it. Whoops.

Anyway, here's some pics of the Shirobon visuals (he was friggin' ace btw), which was an entirely live-coded set from scratch. I had a lot of fun running audio signals into the variables controlling the post-processing effects, so everything went hyper pixelly on beats and that sort of thing. (Photo credits go to the wonderful Ultrasyd, who also played a killer set when he wasn't grabbing these amazing pictures!): 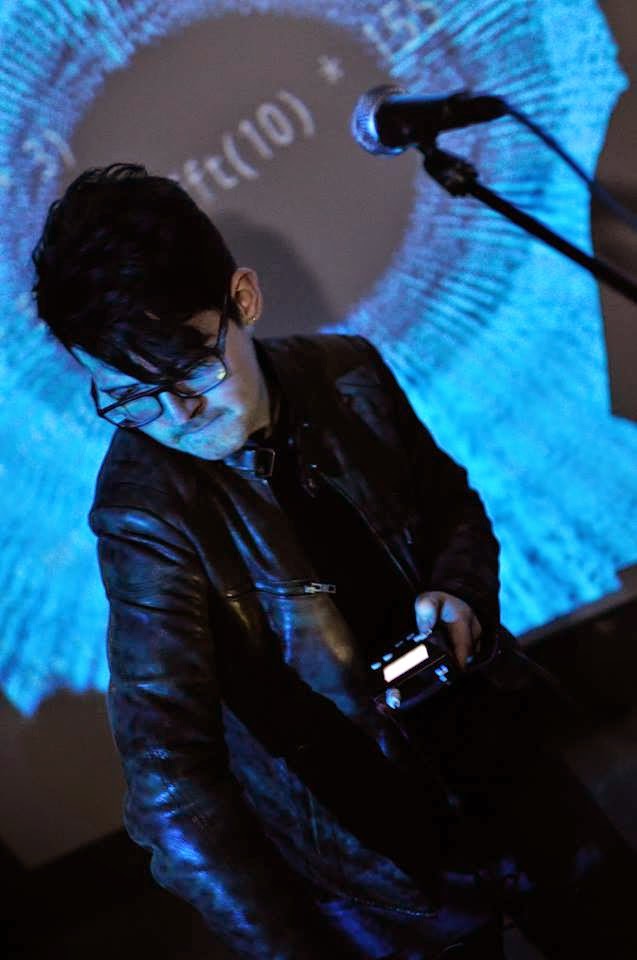 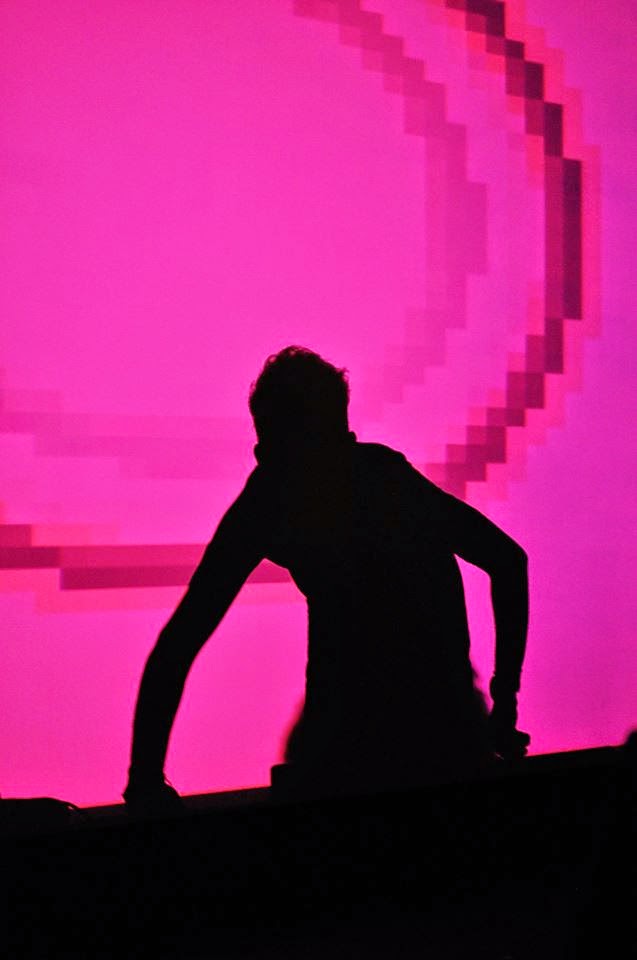 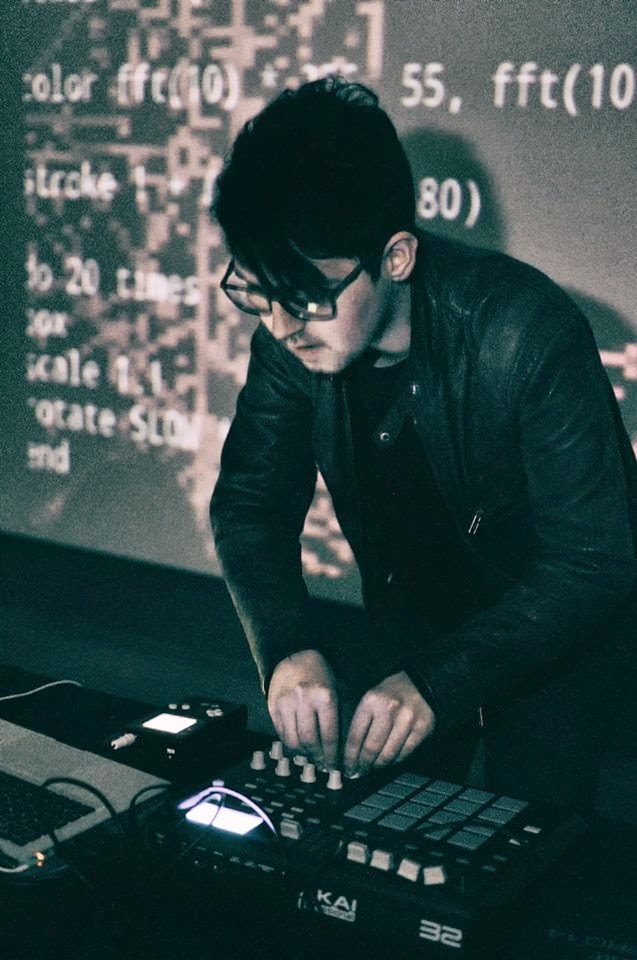 My other set went as planned, and was for Mizkai - this set was a mix of some massive audio reactive pixel work based on some of her artwork, smushed together (technical term...) with a ton of GIFs. There was a lot of pink and a lot of weirdness, but I think it went well and looks suitably silly and unpredictable and suited her excellent set. I didn't take too many chances with this work as I'd never done any video at the same time as live-coding, but it was actually a cinch to do and I'll definitely be using this workflow again. I also managed to drop some 'happy birthday' pizza-cake gifs as Mizkai's birthday fell on the same night, which was fun. Heh. 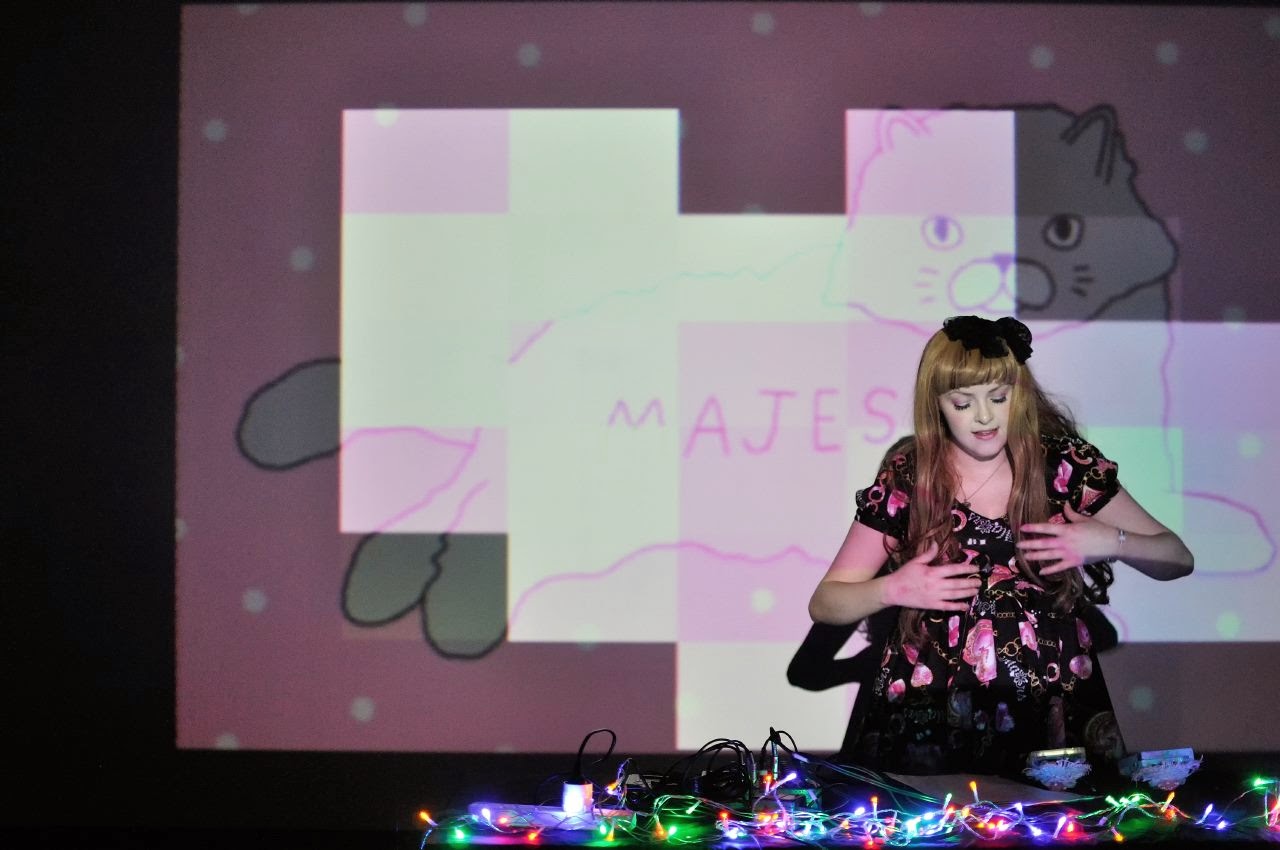 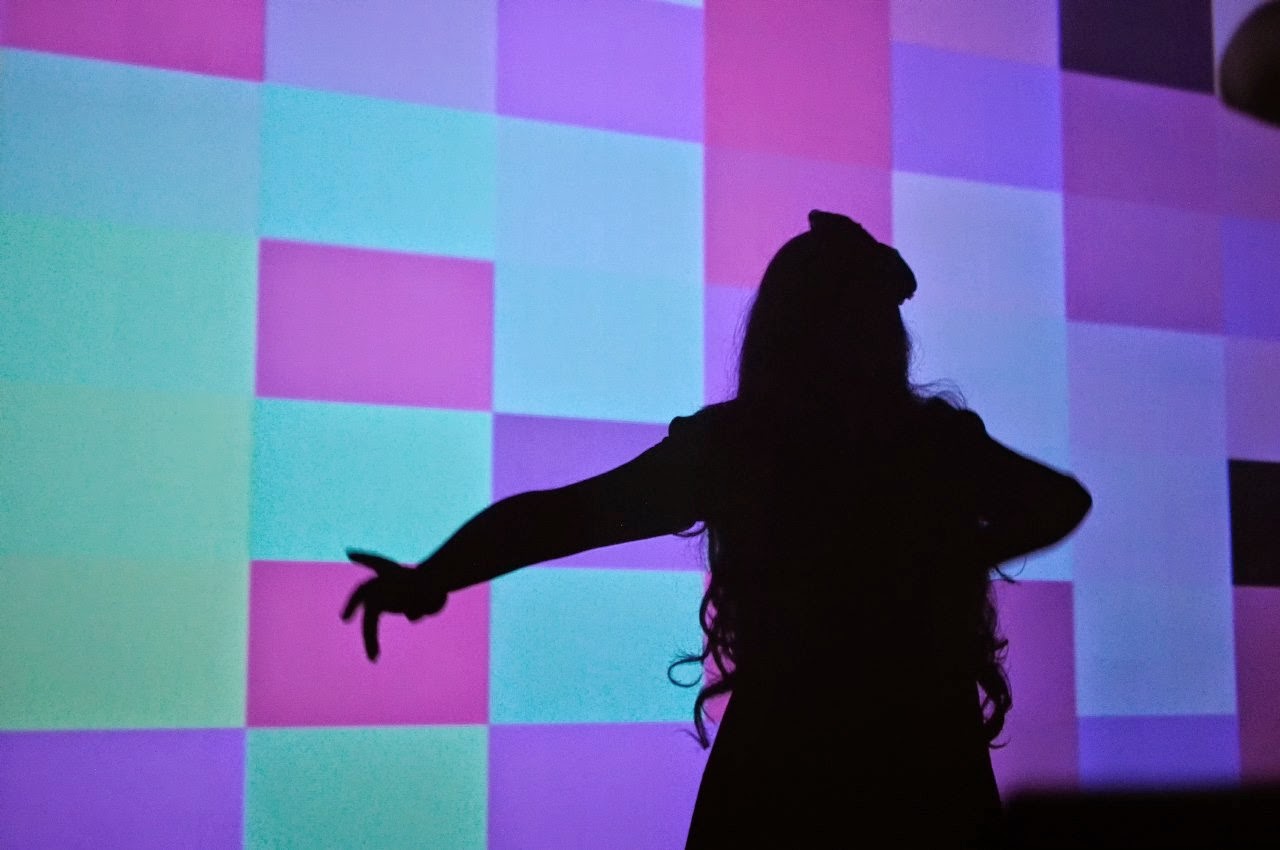 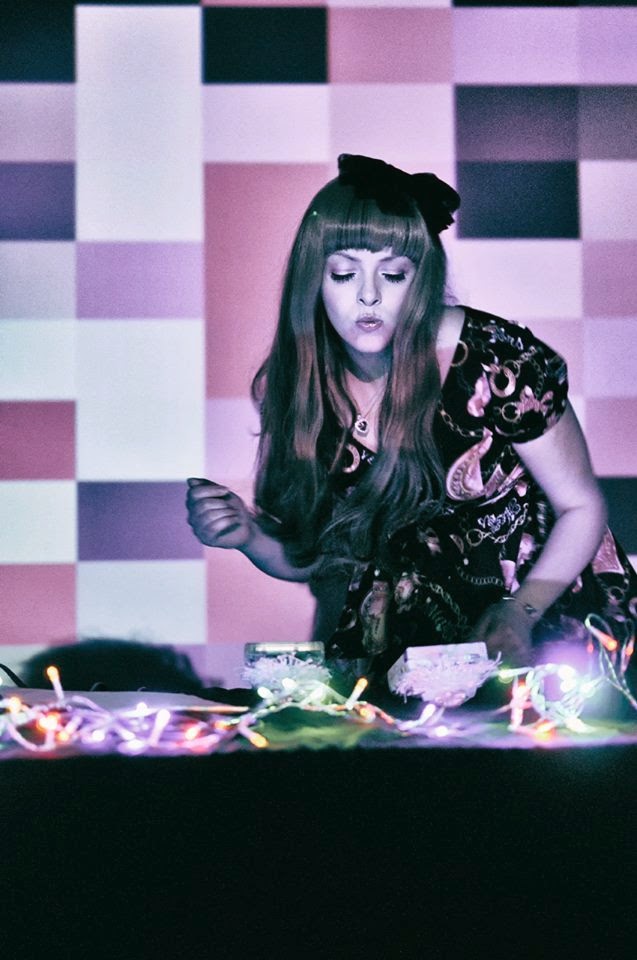 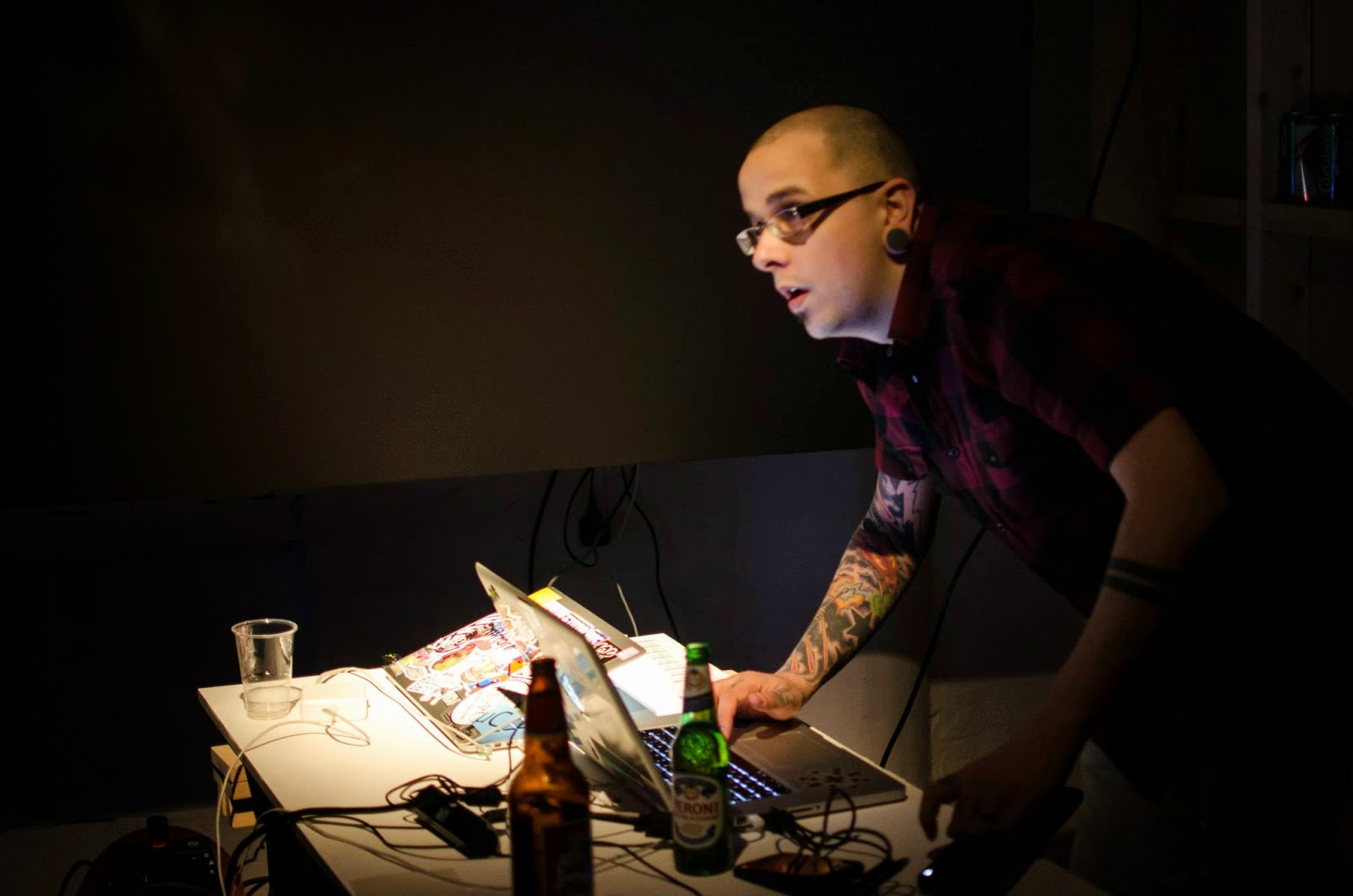 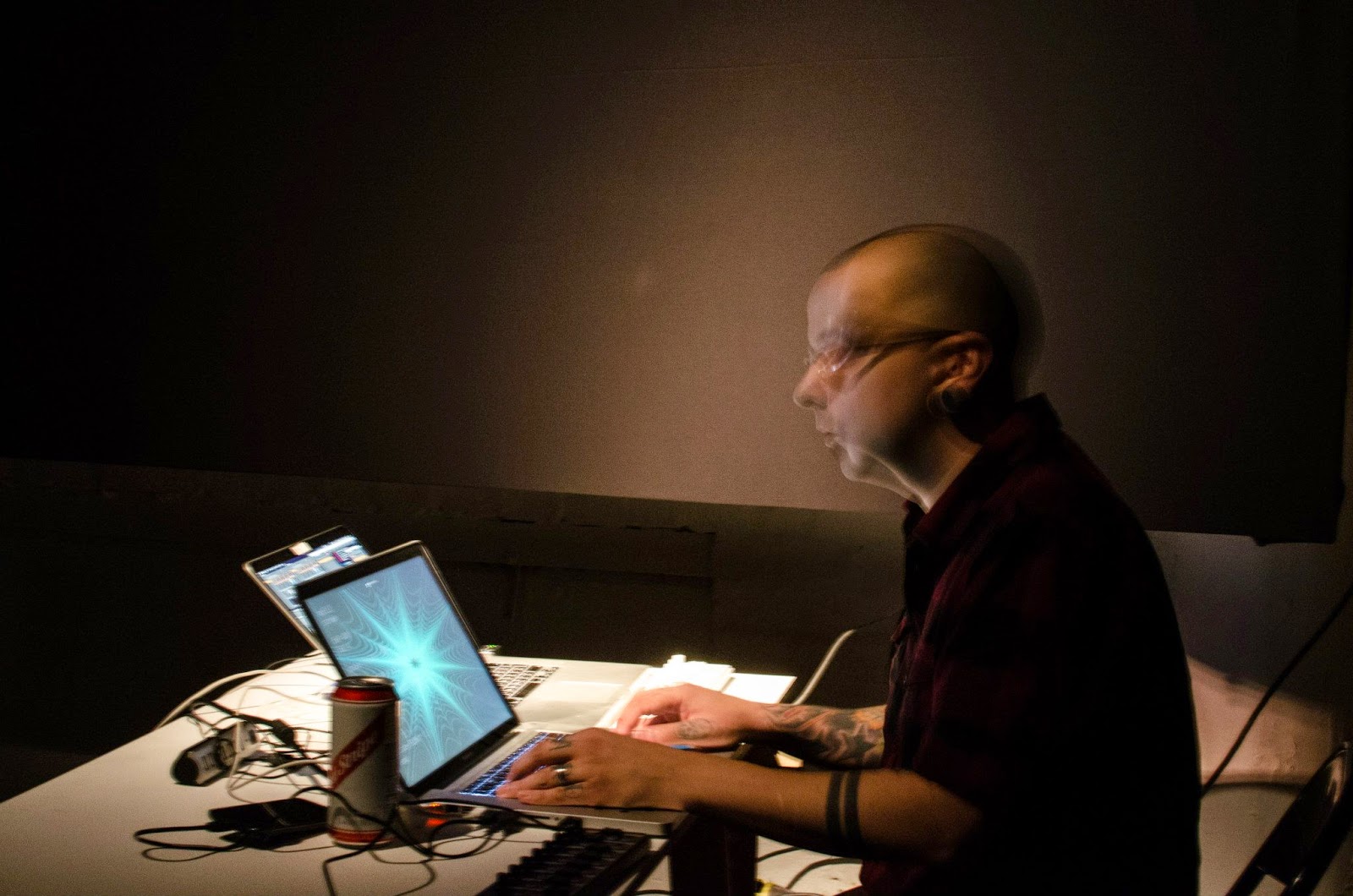 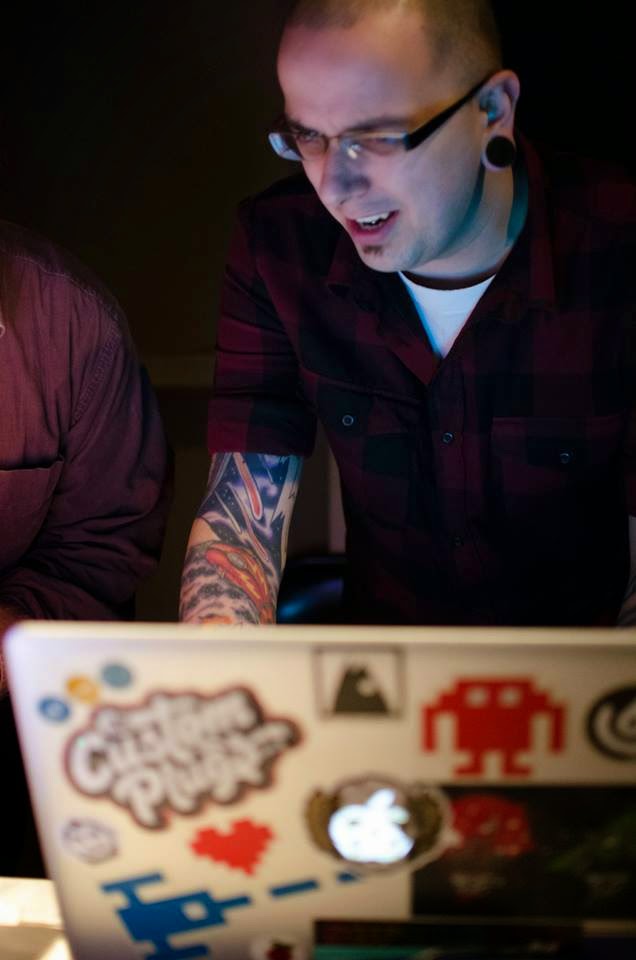 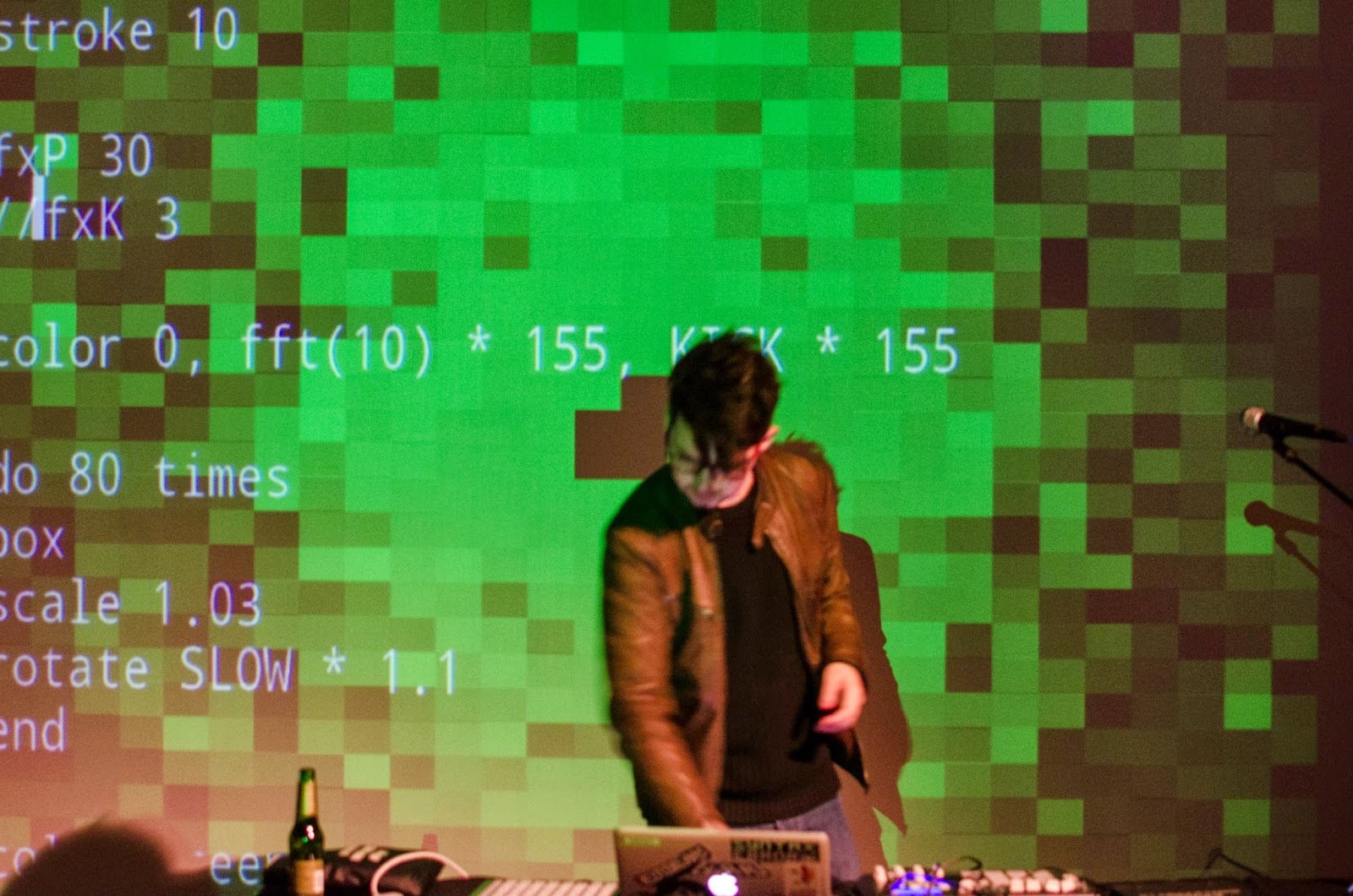 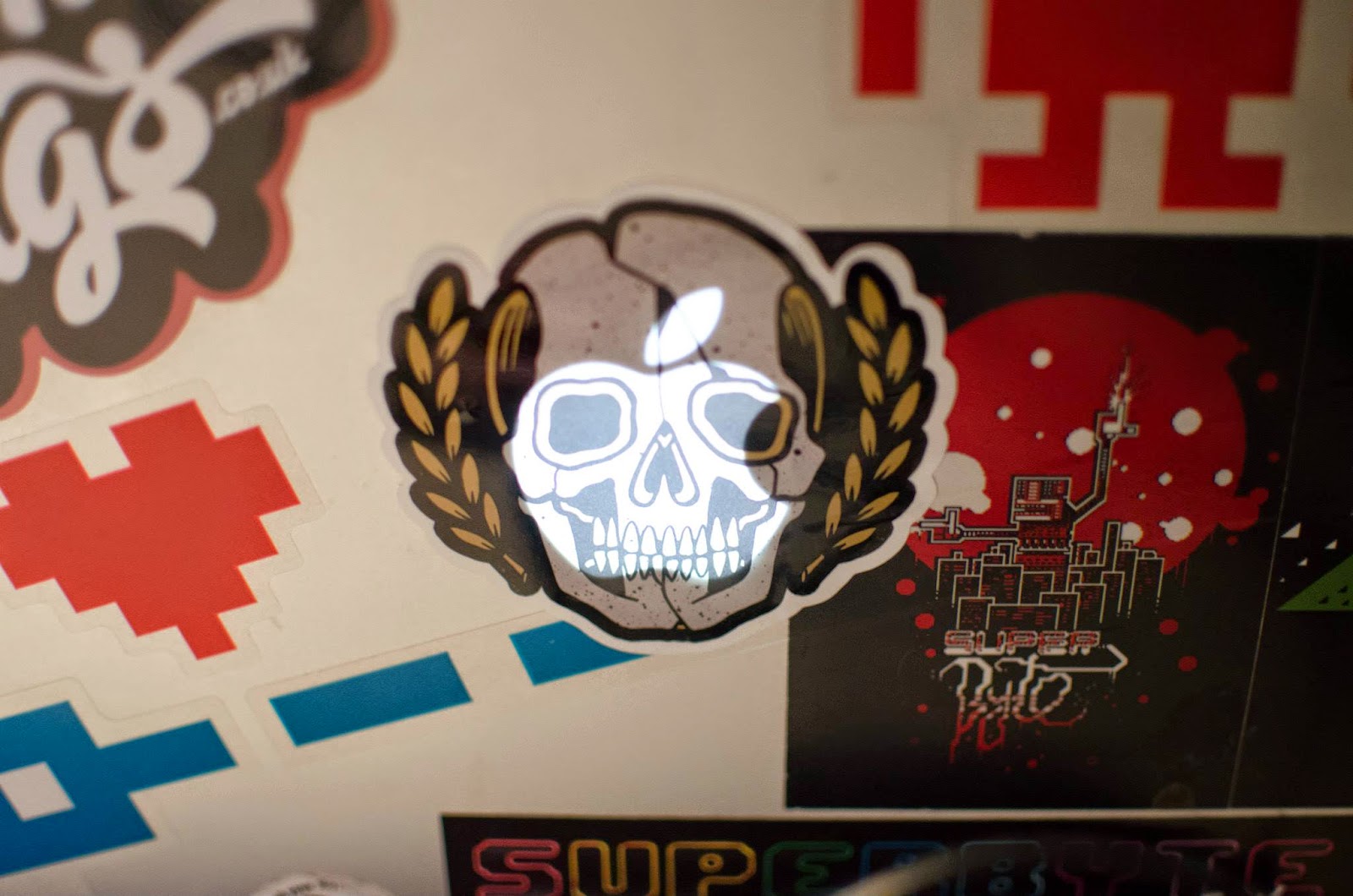 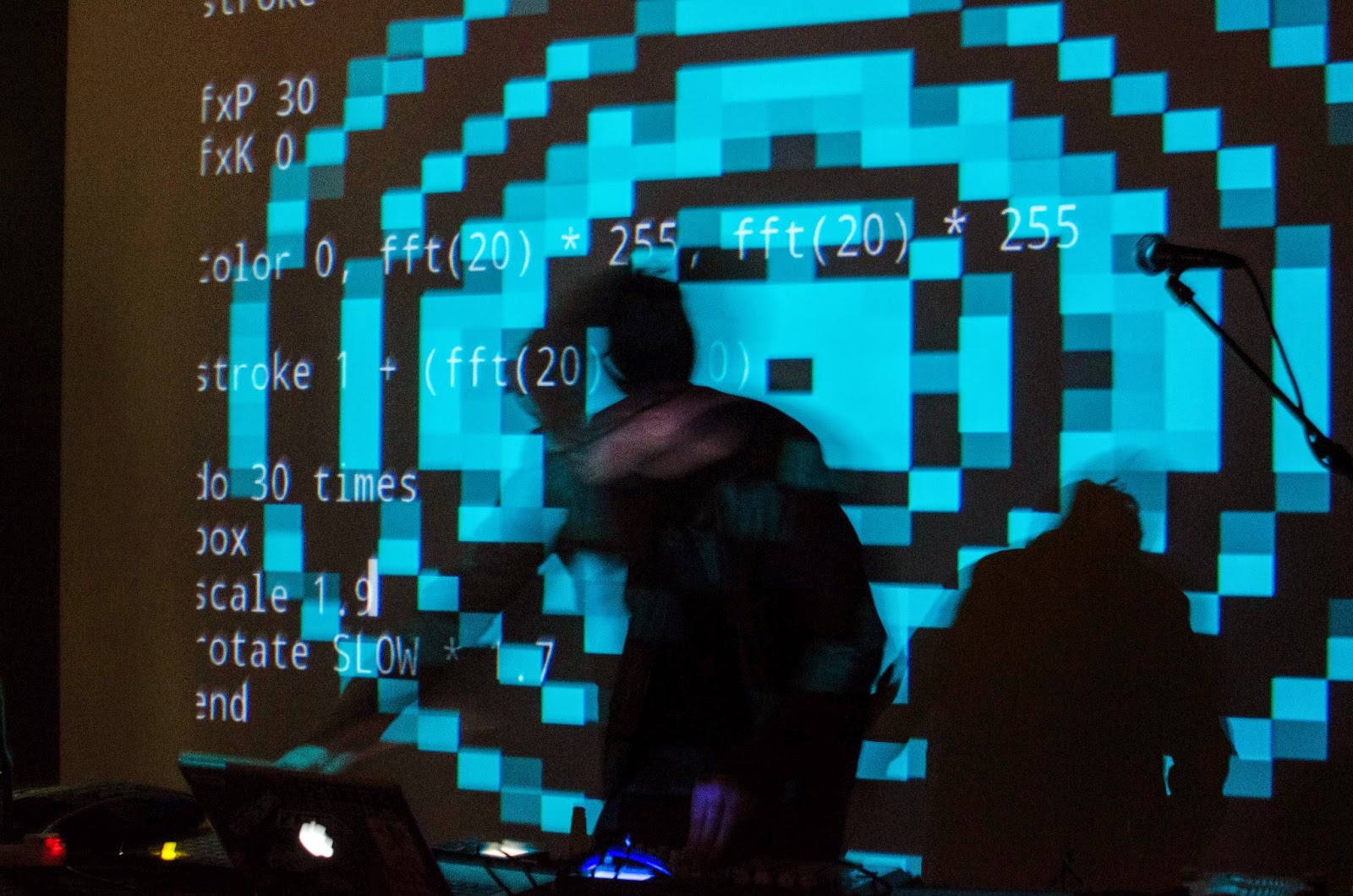 I had a few people ask me about how I did all this stuff (including one guy who stood in front of me while I was playing, sorry I swore at you whoever you were but you couldn't have been more in the way!), and I'll probably try and write up a technical post at some point about it all. It's actually pretty simple under the hood - VDMX serves as the core display mixer, with a Cyril livecoding instance providing one layer of visuals and GifToSyphon providing the other channel, with some super simple hardware control in the form of a NanoKontrol2 and an iPad for OSC into Cyril (although I didn't use this part for uChip). There's also some specific things you can do in VDMX to make everything a bit crisper, but it's fairly straightforward - I promise I'll write it all up at some point, probably after I play Chipfest as I'll be refining it all a lot before then.

So yep, lots of fun was had - it was also great to meet so many people and put some names to faces and all that stuff. I tweeted to this effect after the event, but it worth re-iterating that I've never been more consistently and warmly welcomed by a group of people than I have by the chiptune massive, I must say. I'm definitely not a super hardcore chiptune guy (although my work suits chip very well) - but everyone was really lovely and welcoming regardless. Big up, chiptuners! Never change.

Oh, and lessons learned? 1) don't try to over-prepare too much for artists, sponteneous is good and it's easier to stay flexible when plans change, and 2) don't get so smashed you forget you're doing visuals for someone else now. Derp.