Choose Your Own Adventure

I rarely use this blog for personal rambles, but this is a big one for me. I’ve been waiting a fair while to say this too - about eight years, in fact. 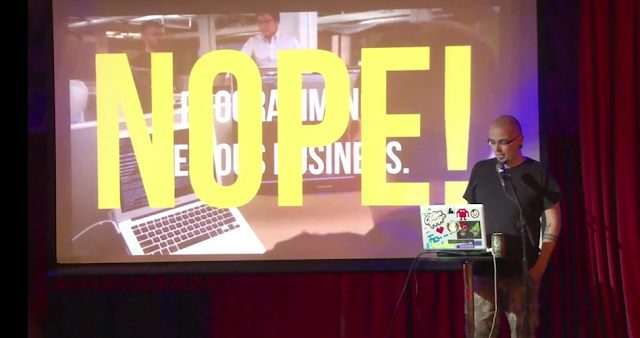 The short version is: I’ve quit my job at the BBC, and have struck out as a freelancer. I’m excited and absolutely shitting my pants.

The long version is as follows…
There is of course, a bit more to it. On surface it looks like an insane decision, but bear with me. I also don’t want this to be a long post.

For anyone who’s followed my work (and if you have me on any kind of social media, you definitely have been doing), it’s been obvious that I’ve been working fucking hard. And what’s been weird is, that work has been in two very separate streams - two lives. The first life has been my 9-5 gigs: first at Lynx, then in BBC Children’s, and then more recently in R&D. I’ve thrown myself into all of these things, including making the decision to leave my first job and bang on the door at the BBC. And of course, within that job it was a fair amount of effort leaving Children’s and finally getting in the door at R&D.

The other life has been, well, everything else - I’ve almost always had something on the go outside of work. Some of this has been for money, most of it has been to scratch the itch. You know the one. Sometimes, when I’m really really lucky, I get to work on things that do both. I’ve dived on every opportunity, every gig, every show - saying no is something I find very hard to do, when there’s so much fucking fun to be had. It’s been honestly insane how much stuff I’ve gotten done, particularly in the last year or two. And it’s not just been projects, the speaking thing has really taken off too, and every time I speak I make more contacts, have more ideas, spin up a bit more.

And so, although all of this has been great, it’s reached a point where even I have had to start saying no to stuff. My wife and family think I’m a workaholic, and I suppose on the surface that looks true, but what they never factor in of course is… a lot of this isn’t work. I create and make and play and all that other stuff not just for cash (ha!), but to scratch the itch, occupy my mind and focus, keep my hand in, and a million other reasons that aren’t money. It’s hard to explain to people, so I don’t generally try nowadays, but… a lot of people cope with their ‘stuff’ in different ways, and mine is being productive and creative. This stuff isn’t my job, or my hobby, it’s my lifeline some days. And so I’ve been keeping on, and enjoying doing so.

Things change, life changes. When I started working I had no kids, no responsibilities, and loads of hair. Nobody knew who I was, opportunities went to other people. Since then, I’ve relentlessly been punching my career in the face, and things have gone really crazy in a lot of ways. The opportunities and chances I’m seeing, and being given, are at the point where they’re just too big or long or complex for me to tackle with just one half of my creative life, while doing a 9-5 with the other. Some of the stuff I’ve had to say ‘no’ to in the last year has been soul-destroying, to the point where I didn’t even dare read the full brief on things before saying no, as it was too crushing turning it down.

This isn't even a money thing either. I mean hey, I like money, money's great. But right now, the thing I value more in the work I do is creative freedom, opportunities to do more in the arts space, the stuff I really hand-on-heart care about more than anything. I want to be more self-directed too, I'm sick of building other people's stuff, at least not 100% of the time. Leaving the 9-5 will hopefully let me address this: even if the money-making work isn't always enthralling (and I'm a realist in this respect), I want to leave myself time and headspace to do more of what I want. And who knows, maybe that stuff will become the main stuff. I live in hope.

And the best part is? All that stuff isn't even my biggest driving factor.

I do, of course, had another factor in play: small humans. I now have two beautiful, hilarious little boys. I'm the luckiest guy in the world. And with that, I now have a stack of responsibilities, but no money, and no hair. Oh man. But, I wouldn’t change it. And more than that, it’s changed me, and it's changed what I want from life right now. And that is, simply, to see them as much as I can while they’re still hilarious funny little organisms who are figuring the world out. I don’t want my job, no matter how much I love it, to keep me away from hanging out with them, teaching them things, and just being there. They won't be small forever, and I don't intend to miss any of it if I can help it.

My oldest son Isaac, who is currently three years old, sealed the deal one morning a few months ago: he went really quiet and then welled up as I was putting my shoes on before leaving the house to go to work, and told me tearfully that it makes him sad when I get on the train. He absolutely slayed me. How do I explain to my children that I couldn’t do bedtime because I was busy in an office somewhere doing some thing with computers that doesn't really matter?

I had a huge, huge moment of clarity at the point, and realised: I can fix this.

I handed my notice in at the BBC, and have started getting my shit together to strike out and do things on my own terms. In about four days I will receive my final BBC pay check, and then that’s it.

I have no idea how it’ll go, but this is the first time it’s felt right - both in terms of my own work, my visibility and contacts, the opportunities I’ve found (and made for myself!), and of course in terms of a real, deep-down desire to see my children grow up instead of wasting that time commuting and staring at screens.

That’s it. This was my squishy “what the fuck are you doing?!” response post. There’s more to this, in terms of how I’m doing things and practicalities and blah blah, but that’s for another time I think. There is of course a lot more thinking been done on all this aside from my emotional/creative response. Another time. I just had to get this part out.