I am giving away an arcade cabinet*

*with caveats, read on.

*** PLEASE NOTE, the cab has now been claimed, thanks for playing! ***

Wait, what?
Yeah, you heard me.

If you follow me on any networks you'll know that over the last year I've been working on and touring an arcade cabinet artwork called The Loss Levels. You can read about it here on Engadget, and there's some info on the wider project on The Guardian here. 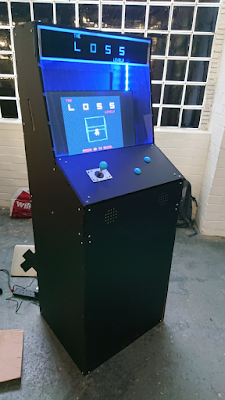 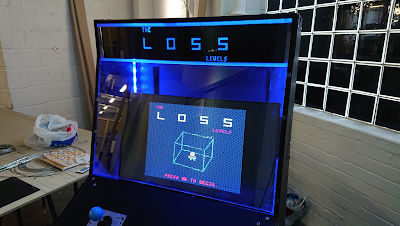 Why are you giving it away exactly?
The cab was originally commissioned for the amazing Now Play This festival at Somerset House in London, and has since been exhibited at HOME in Manchester, as well as Sheffield Doc/Fest. The cab was added to the Doc/Fest touring exhibition, and made it's way to Lighthouse in Brighton.

The next stop on the Doc/Fest tour is... Buenos Aires.

This is great and very exciting, but comes with the snag that the current cab is not designed to go onto a plane - in fact it was never really designed to move much at all! I am currently putting the finishing touches to version 2.0 of the cab, which is massively more robust and won't break into a million pieces during a flight.

So, this also means the original cab is now sat in my studio, and to be honest I don't have space for it. It's a little dinged up, but it's intact and perfectly usable. I decided that it might be nice to help someone out, and so I'm going to give it away.

About the cab
The cab was designed and fabricated by the awesome James Medd, and is made from an MDF core wrapped in authentically arcadey semi-matte perspex. The unit splits into two halves so it'll go in a reasonably-sized car without too much fuss. As I say, it's got some cosmetic wear and tear from being transported and played a zillion times, but structurally it's fine.

What's included?
This offer is only for the physical cab shell itself - the screen and controls are being taken out for the new build. The front panel that holds the controls is included, I'm just removing the joystick and buttons. I can provide precise details of the screen/fixing/controls for whoever takes it. To clarify:

INCLUDED: cabinet shell including panel that holds the controls, transparent perspex window for the front, specifications and design files for the whole thing including the fixings and screen.
NOT INCLUDED: screen, electronics, joystick/buttons, 'loss levels' signage.

Can anyone have it?
No. Sorry. This is free-as-in-beer, but has the following caveats:
1) You'll need to come and pick it up from my studio in central Stockport at some point in the next couple of weeks
2) This offer is only open to someone who'll use it with either learners, beginners, or a group that wouldn't ordinarily have access to this sort of thing.

To be clear on point 2: I'm talking hackspaces that are open and used by people who are learning and growing, or schools, or community groups, or that sort of thing. If you are a well-established maker or a nerd who wants it in their space, or to turn it into another MAME cab, or whatever else, you are not having it, do not ask. I want to pay it forward to someone who'll use it for good, this isn't a freebie for someone to waste sticking it in their house. Whoever gets it should be hacking on it, learning with it, making something cool with it. Oh and I wanna see what you do with it too. :)

OK! This is totally me/us. What next?
Great! Get me at hellodanhett at gmail dot com and let me know who you are and who would benefit from it. This isn't a first-come-first-served thing as that's a bit unfair, the cab will go to whoever I feel will turn it into the most benefit for people who will learn and experiment and benefit from it. To be as transparent as possible: I'll be giving priority to disadvantaged/community groups and young people first, who wouldn't usually have chance to noodle with something like this. Good karma and all that, you know how it is.