Coding and raving and workshops, oh my!

If you follow me on twitter/facebook/whatever you'll have no doubt seen me excitedly waffling about the livecoding stuff I've been noodling with recently - I thought it might be wiser to put it all in one place and then you guys can have your feeds back.

I've been working with Cyril a lot recently - it's become my go-to weapon of choice for live-coded visuals, and I like it so much I've started breaking it open a bit and added stuff I want in it. I'm certainly neither a C++ guy or an openFrameworks guy, but what better way to learn than by dicking around with something you barely understand, right? Right. Of course, aside from the fact I selfishly wanted a few features adding right this second, it's also a good chance to start unselfishly giving something back to one of the open source projects I love, and Cyril has been a solid place to start.

So, the big thing I've added (in a fairly rudimentary way) is post processing effects, via ofxPostProcessing. There's a few examples below, tons more on my Vine feed.

Pixelate (bit blurry, but this is how crisp it actually looks):


You get the idea.

Currently the implementation is super basic, mostly due to my fairly glaring C++ ineptitude, but as a proof of concept it's working nicely. At the moment I've simply added an XML file containing switches that turn any number of the filters on and off - this is fine for now, but the problem with it is that the effects only kick in when Cyril starts up. Not ideal, but it'll do for now. Ultimately the plan is to add everything as commands into Cyril, so a user can turn them on and off on the fly. However that will either have to wait until I'm more free and more confident with oF, or perhaps until someone else picks it up and runs with it. There's also talk of OSC support going in at some point, which would be great for live sets.

So anyway, what am I doing with all this stuff?

First up: the Manchester Algorave is happening on Tuesday night (8th July) at the Deaf Institute. Yaxu/Alex kindly offered to let me do some visuals at the show, which I've jumped at. The fun part is - I have absolutely zero idea of what's going to happen on the night: where I'll be, with what kit etc. I'm going to turn up with a laptop and hopefully I'll have chance to throw some colours and shapes around. The lineup is great too, I'm really excited about it. Check it out: 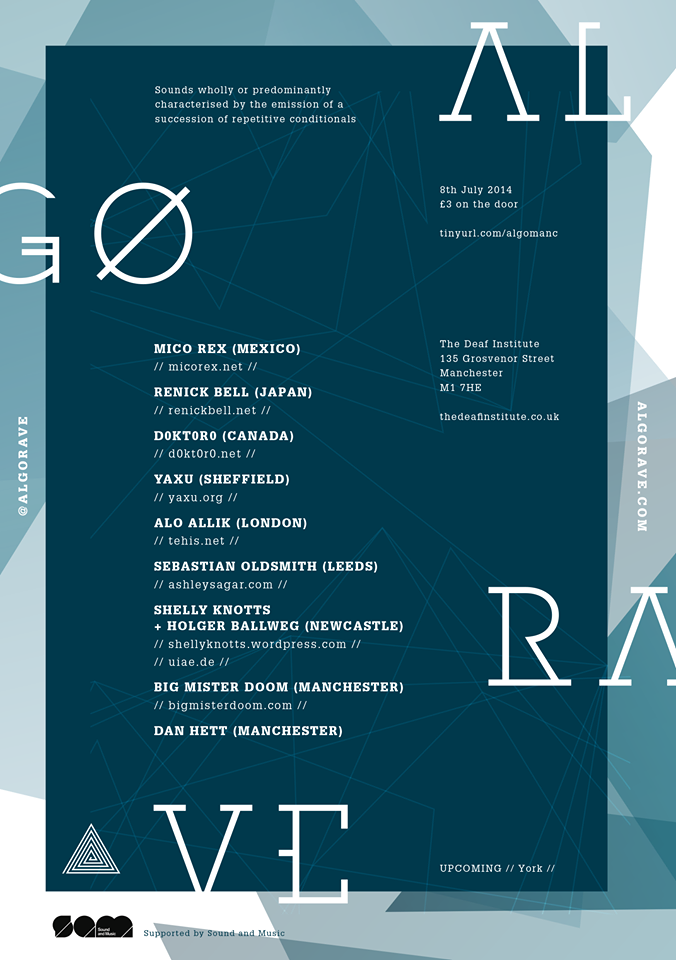 Following that, on the 19th July I'm going to be doing a session at the Manchester Girl Geek's NOISE PARTY, at 2022NQ in Manchester. This will be a fairly varied event, with all sorts of folk making music and visuals with all sorts of tech. I'm going to be putting visuals over some (presumably terrifying) live-generated noise created by Davydd Pattinson, and I'll be sticking around afterwards to show people how it's done - probably using Livecodelab.

Finally, I've managed to grab a lightning talk session at this years Reasons To Be Creative in Brighton in September. I get three minutes to talk at extremely high speed about something that excites and inspires me - livecoding is definitely where my energies are being focused right now. I'm torn between talking animatedly over slides/video, or being brave (stupid?) enough to see if I can code something live while also talking about it, or maybe NOT talking about it and letting the visuals do the talking... It'd pretty cool coding up a loud rave in the Brighton Dome in less than three minutes, in the morning when everyone's hungover... we'll see though.

Oh, and my project with the handsome and talented DEADBEAR is definitely still on the cards too (we've been doing bits and pieces already), on the back-burner at the moment while we get our respective shit together but that's going to be tons of fun. This is looking like it'll be a slightly more structured livecoding project for his live shows later in the year, and hopefully the next few months will give me plenty of chance to hone my fu before taking this on.