Dan vs the Manchester Algorave

So last week I finally got to try out some visual work in a live setting, at the Manchester Algorave. It was easily the oddest thing I've ever done with computers, and has absolutely sealed the deal on me doing more of this kind of work - I got to prove to myself I can throw down in a live setting, it was a great opportunity to find out what works and doesn't work (both in terms of my approach, and the software), and most importantly it was hugely inspiring watching so many killer devs/musicians/creators making so much amazing noise!

I rolled a customised version of Cyril, which I'd added some rudimentary post-processing effects to. My implementation was very simplistic (a combination of lack of time and lack of C++ knowledge), only as complex as turning on some switches in an XML file. The drawback to this was that when I wanted to switch I had to kill the app and re-run it, I basically did this in between sets and tried to choose appropriately (or not at all, which I did for two of the sets). The best results I had all night were with the pixelate filter, which was really quick but looked fantastic when projected. I decided to kick the effect up a notch later in the night (wanting bigger and bigger pixels), so I ended up making some hasty edits and re-compiling the openFrameworks project - no mean feat in the middle of a dark algorave.

One thing that did catch me out was when I set everything up: my plan was to run Cyril on the projector and code using a slightly more full-featured editor on my laptop screen, keeping the two separate. This ended up not working, as Cyril seemed to orient itself really oddly on the projector, clipping lots of the stage off. I think this is because it sets itself to full screen on the primary screen first (i.e. my laptop) and then retains the size or something when moving to another screen. Ultimately I didn't have time to fix it, so I ended up just duplicating my laptop screen onto the projector and using the built-in editor, which was a bit scary given that it's a little buggy AND doesn't have an undo function! In at the deep end, indeed.

Of the six sets I did visuals over, one the standouts were working with Big Mister Doom - they opened the night with a really nice set, almost hiphop-like, so I kept my stuff dialed back and subtle (apart from one bit where I guessed a number wrong and strobed massively at them for a bit until I fixed it, sorry chaps!). This was taken just before we started: 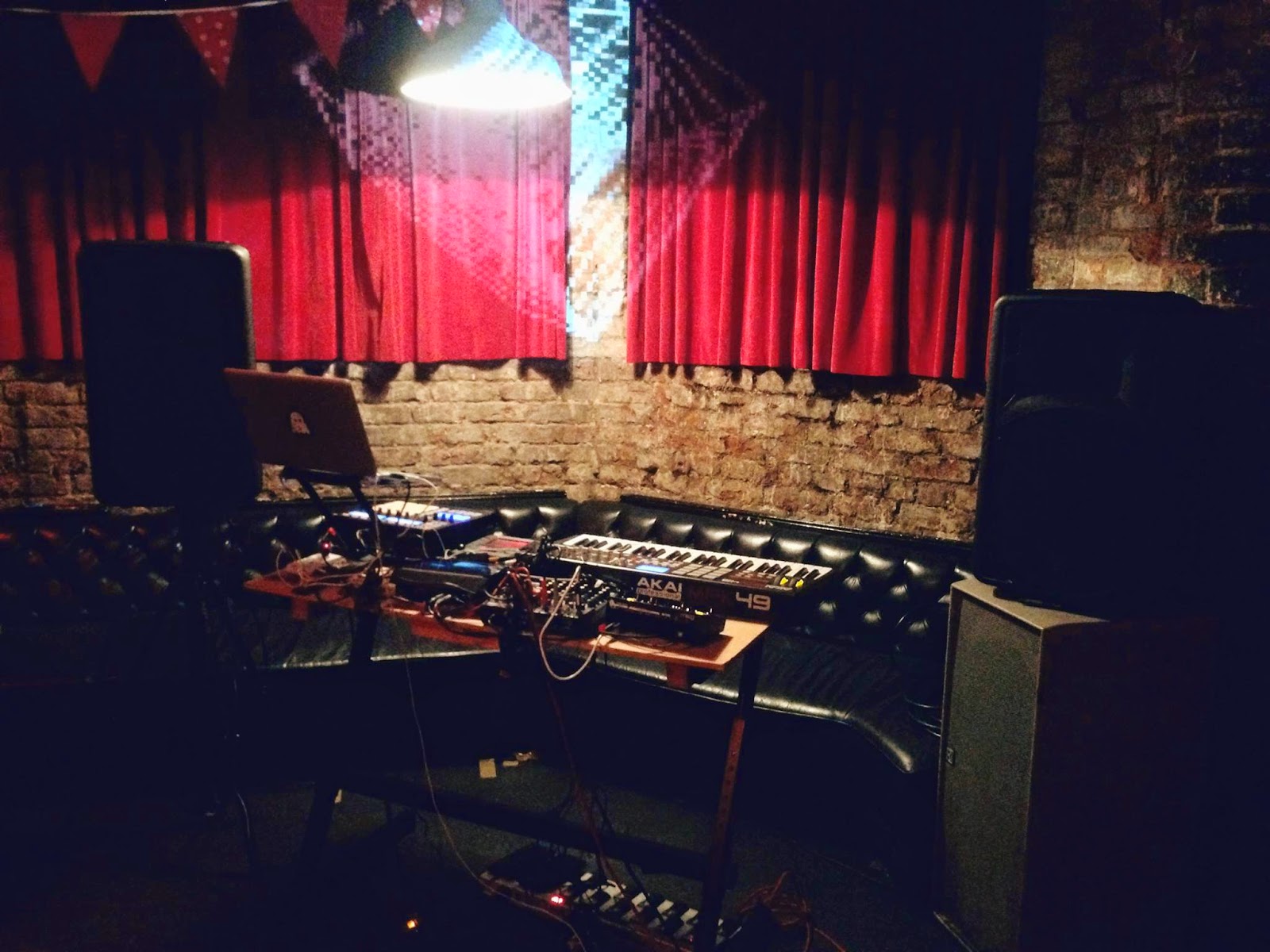 Mico Rex were also absolutely unreal too, they had their own (absolutely amazing and hardware-controlled) visuals so I gave my laptop a breather and threw some shapes in the audience instead. Hugely entertaining dudes.

For one of the sets I wanted to take a break (I'd done a couple in a row and my eyes were exploding), so I quickly noodled up a sort of pixellated kaleidoscope together and set it to use really slowly incrementing randomness for the positioning and audio input for the colour and intensity. It looked like a sort of swirling lavalamp made of NES pixels. I set it going, and retired to the bar to hang out with people for half an hour, while keeping an eye on the projector. For a hands-off piece it turned out nicely, and by the time I got back to my machine it had taken on a completely different appearance and degenerated into a pixelly glowing mass. Check it out: 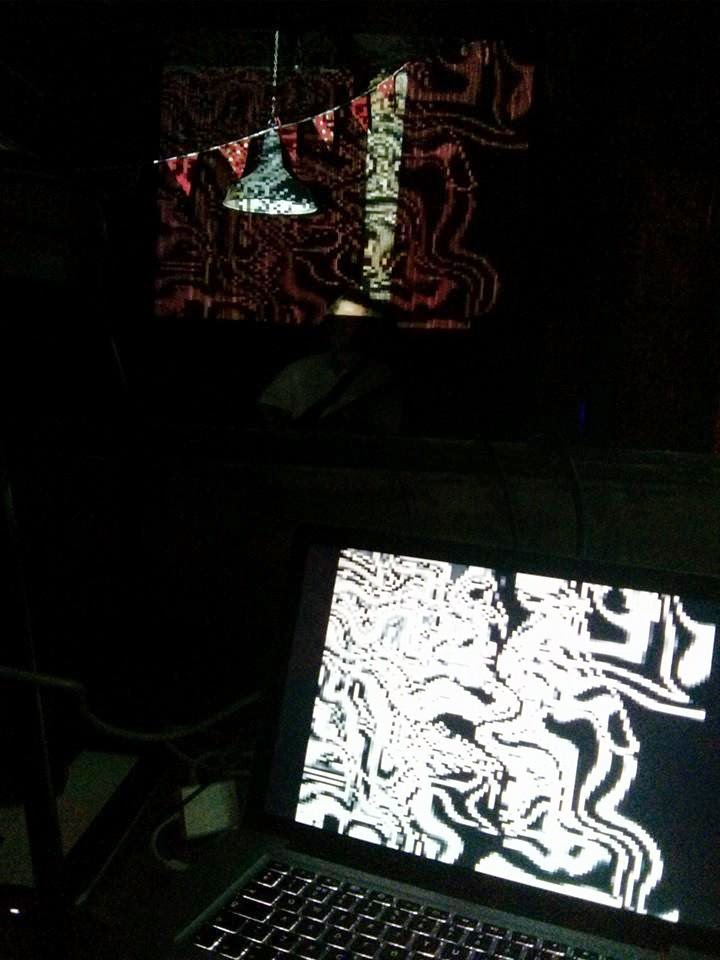 I followed this up by going fairly nuts with glitchy weirdness for a killer Renick Bell set, which was highly challenging but loads of fun - his music evolved into awesome noise very quickly, so it was fun trying to match it with equally deranged visuals. Great set. Shame I couldn't find any good video of it! Here's Renick just kicking off on one projector, I'm dropping visuals on the other one: 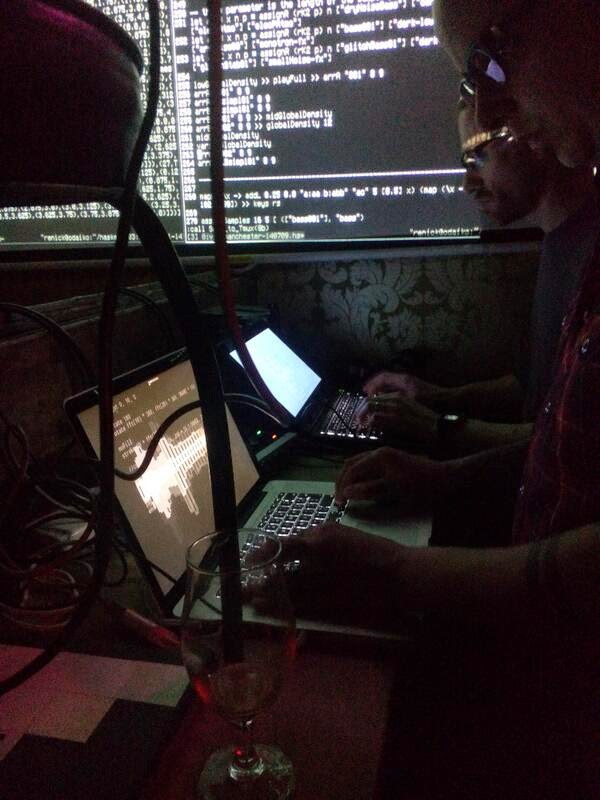 The end of the night degenerated into absolute fucking chaos of the best kind - first Yaxu/Alex played a great and really varied set, for which we mashed our projectors together onto one surface. I kept it clean and simple for this one, and used my hastily re-compiled copy of Cyril to put out big pulsing geometric shapes rendered in audio reactive neon: 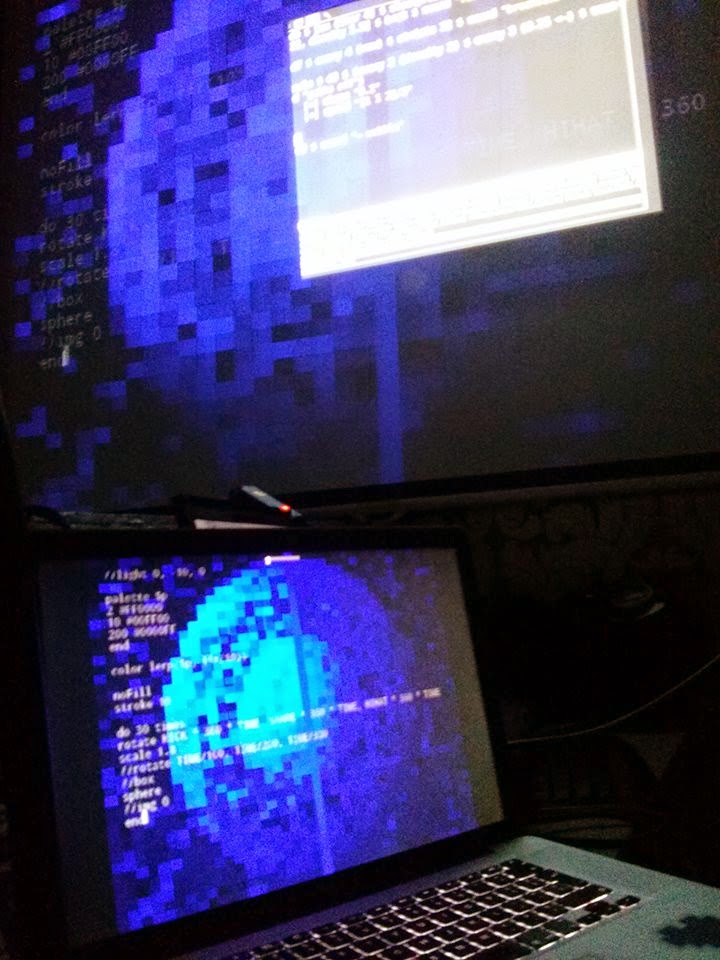 There's also some vines of it in action, thanks Luke!


Following that, Sebastian Oldsmith dived on and played the craziest one-man-army algorave party set ever - impromptu guest vocals from Tito of Mico Rex (plus a few other dudes I don't know but were awesome), and we also angled the projector down a bit and fired massive strobing neon pixels over the performers and the audience: 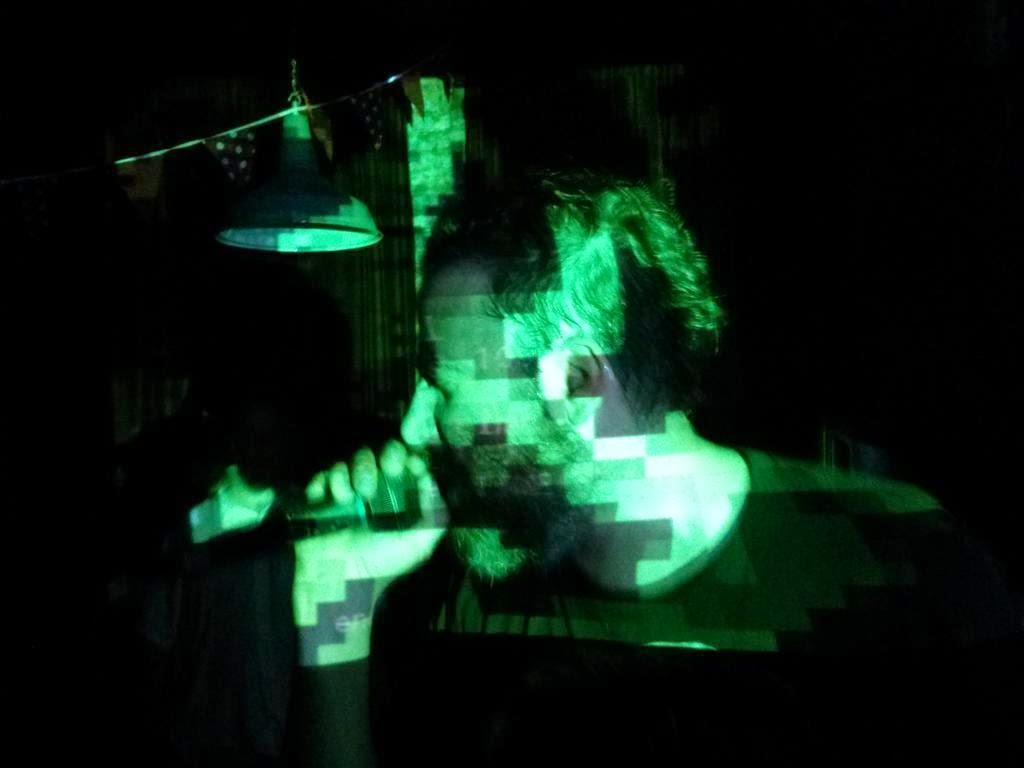 Here's an awesome video of it going down:


(At this point I was fairly worse for wear, and I actually made some hideous mistake somewhere along the line which stopped my editor updating, but the visuals were strobing so hard at that point that I couldn't really read the code anyway. Luckily the rending carried on and it turned out fine...)

So yes, an awesome evening in every sense of the word. I'd like to say a massive thanks to Alex for inviting me along, to Big Mister Doom and Ash for setting it up, and to everyone who added to such an inspiring few hours. I had a blast, learned a lot, and I hope I added something to the experience for folks. Let's do it again sometime! ^_^
Posted by danhett at 11:42