Dan vs the NOISE PARTY

Yesterday I had another chance to go and cause trouble with a laptop and projector - this time for the Manchester Girl Geeks NOISE PARTY (full disclosure: I came up with the name, and the capital letters are totally part of the deal). 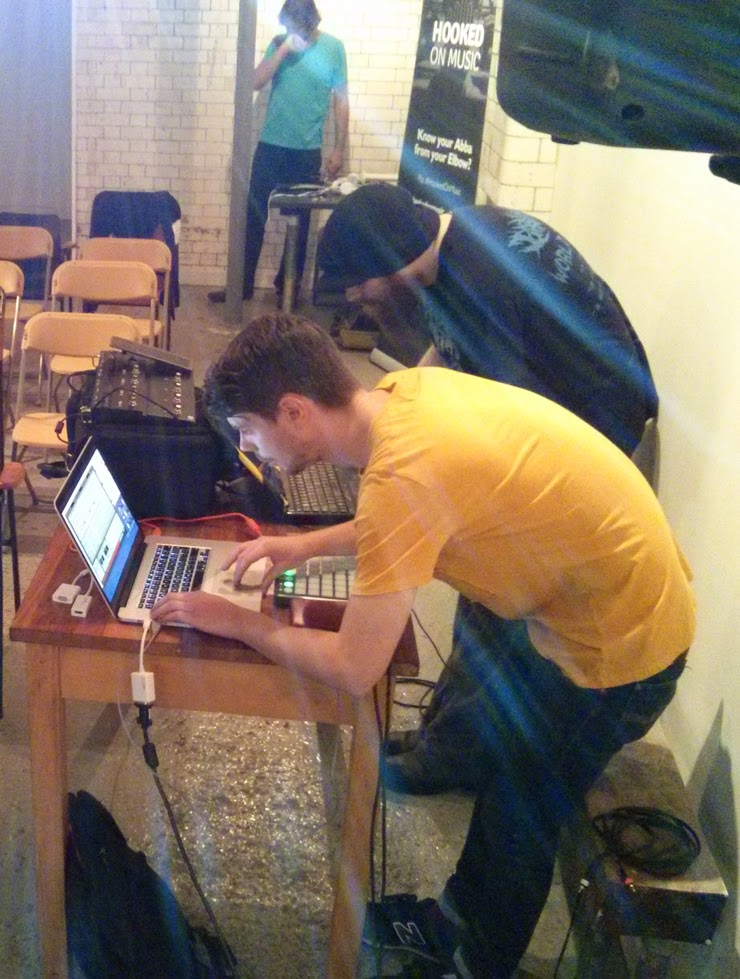 The event was a bit of a one-off special as part of the Girl Geek's regular events - I've never attended one (what with being a bloke and all) so it was nice to be able to get involved and see what they get up to. It mostly involves tech and cake.

The idea for the day was to put on talks, demos and performances from people who make or work with sound and computers. In the end we had full talks from me and DEADBEAR, a performance from me and Davydd Pattinson, plus some all-day awesome from the likes of Tobin from MOSI (demoing their new game) and Ruth from Science Made Simple (who had an actual real life theramin as well as some neato voice changing tech).

In fact, Ruth had a sneak preview of what was to come when Davydd got hold of the hardware voice changer she'd brought along. Behold: We held it at 2022NQ, which was such a killer venue for this type of event - plenty of space, a nice big HD projector (big thanks to Madlab for loaning me a spare, we didn't need it in the end), and a decent PA for us to smash audio through: 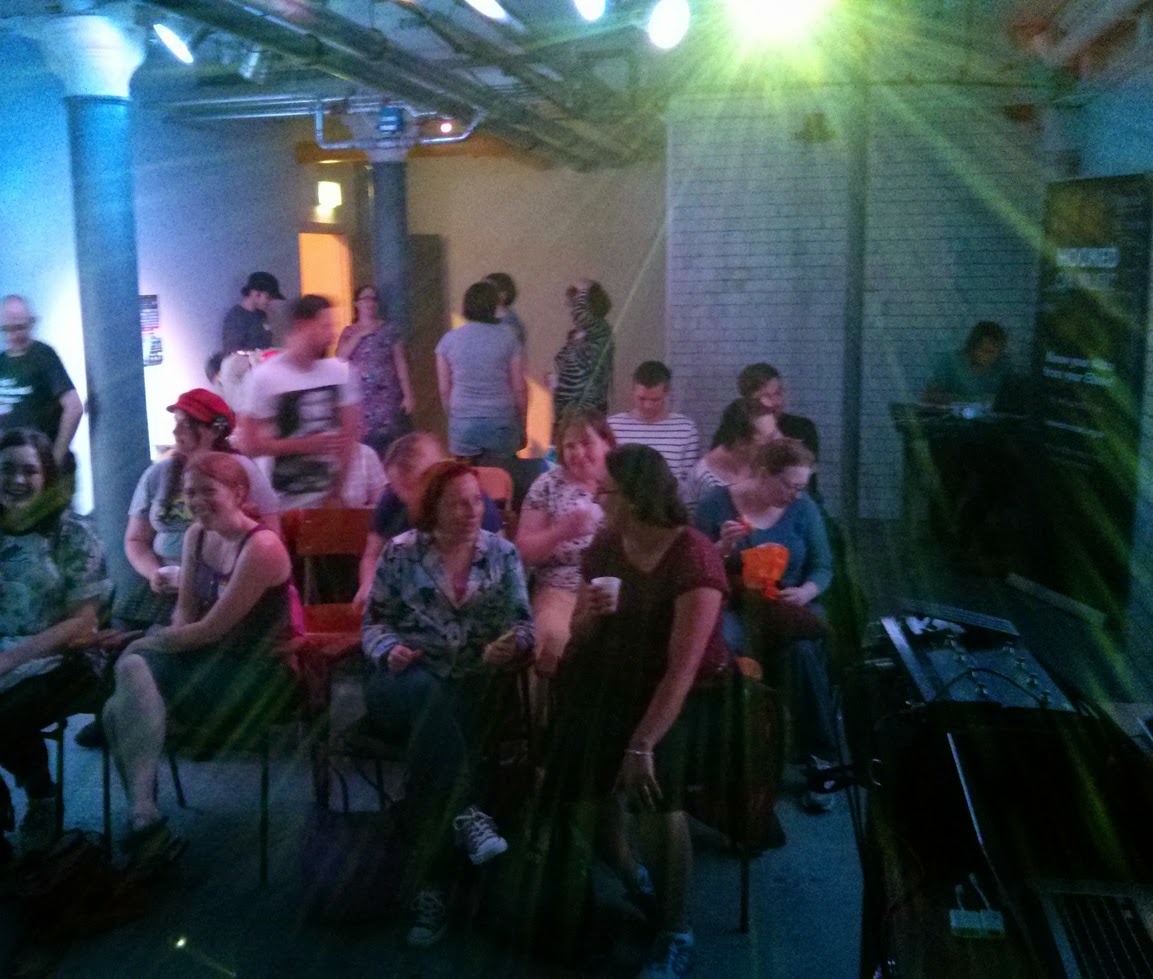 The staff there were ace too, really helpful in getting us rigged up. Thanks, dudes. The only downer on the whole thing was the INSANE temperature - on the day we ran, there was some sort of humid rainy thing going on with the weather, so it was pissing it down but also swelteringly hot. The whole thing turned very sweaty, very quickly. Grim! I was super worried that nobody would turn up because of the rain, but Manchester's geek community are clearly made of sterner stuff than that: we had a full house, with people standing up at the back. Bam.

My session was first up, and I opted to keep it simple and (I hope...) interesting - I did a quick intro on what livecoding looks like, and how it compares to traditional programming, and why I love it (I was doing a lot of animated hand-talking at this stage). I then introduced Cyril, and did a really quick-fire demo on how to to quickly draw things, get stuff moving, and (of course) react to music. I intentionally kept everything easy, as I knew I'd be doing something fairly nuts in the other session, using a nice loud Tipper tune over the PA to power some simple demo visuals.

Here's sort of what it looked like (excuse the high speed waffling and extreme hand-talking):


Next up was Mr DEADBEAR, who did an absolutely killer session about how he constructs his music - this was an amazing insight into the whole process, I particularly liked the fact we got to listen to his new tunes nice and loud (they sound great) and then have him break the music down into it's individual components. Really smooth session, and people went rightly nuts for it. 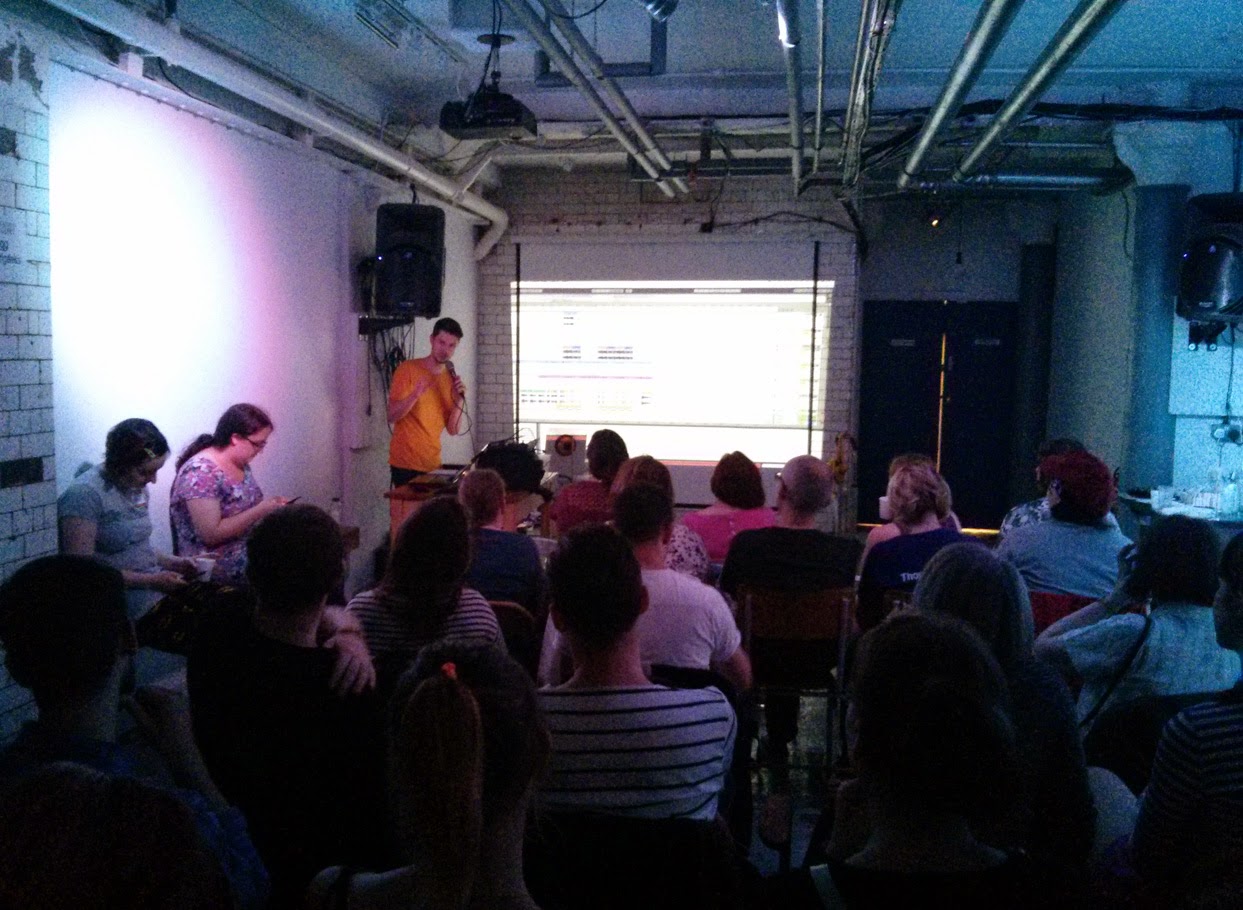 Finally (and at this point, sweatily), Davydd Pattinson stepped up to show us how me makes the scariest noise imaginable using a computer, with me livecoding visuals over the top. This was an intentionally unrehearsed performance, as a big part of this exercise was to get across that livecoding is unpredictible, emergent, and sometimes chaotic. Davydd very politely warned people in advance that the sound would be (and I quote) 'boisterous', and Gem from the Girl Geeks went as far as to warn attendees that we wouldn't be offended if anyone walked out. What an intro. (In the end, only two or three people walked out, whew). The set itself was a single piece of music/noise, which started fairly ambient and nicely textured, before building up into what I can only describe as glorious white noise and feedback, punctuated with Davydd's furious death-growls screamed live over the top.


And looked sort of like this (it got much more abrasive later but I can't find any video of it)...


At the same time I was putting out increasingly strobing glitchcore visuals over the top of it all, which ended up getting the point where I couldn't discern the code over the top of everything. It was absolute, utter, unhinged fucking chaos. The best part was probably when we finished, Davydd killed the audio abruptly rather than fading out, which also had the dual effect of killing the audio-powered visuals, at which point everyone in attendance went unexpectedly wild with applause. Brutality prevails!

Excitingly, Davydd and I have had an offer to do this again already for at least one other gig, possibly two - we're in agreement that it would be rude not to do this again really. I'm quite excited about the prospect of doing something a bit more structured: the intentionally unrehearsed set we played was all sorts of fun, but I'd quite like to be able to think about our approach in advance next time and destroy even more eardrums.  We just need a killer name now, answers on a postcard.

So yes, a sweaty but excellent day. Massive giant thanks to the Girl Geeks for the putting it on (particularly Gem),  thanks of course to Nick, Davydd, Tobin and Ruth for running awesome sessions and demos, a massive thanks to Zoe E Breen for the videos, and last but not least a giant internet high-five to everyone who braved the rain to come and party with us.

Sorry about your eardrums.