Dan vs Reasons To Be Creative 2014

Earlier this week I spent a few days in sunny Brighton, attending and speaking (rapidly) at Reasons To Be Creative 2014. It's been some years since I was last in Brighton for Flash On The Beach, so I jumped at the chance to go and check out what it morphed into. The other big reason for me attending was that I managed to grab a spot on the infamous elevator pitch session... 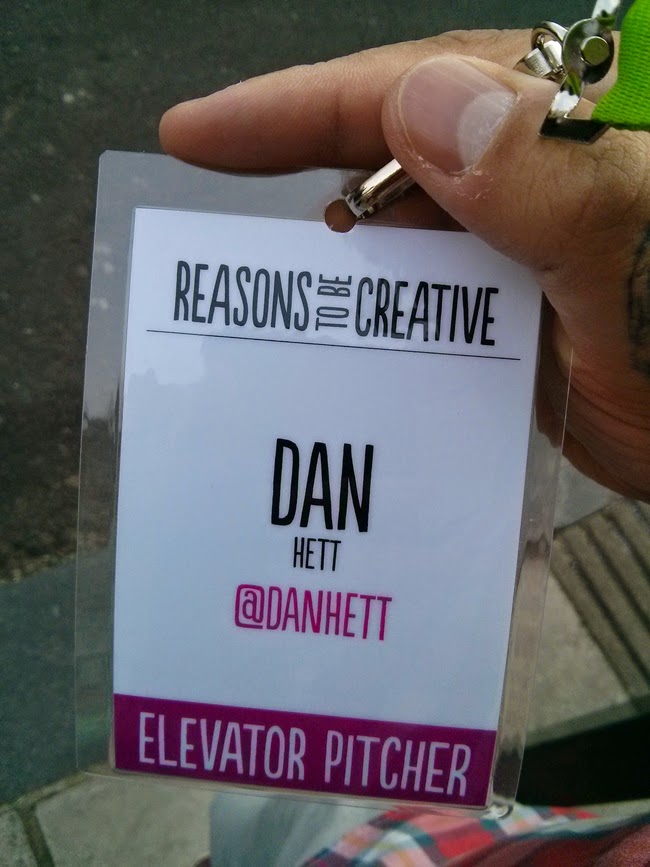 For those unfamiliar, Reasons is a three day creative/tech festival ("conference" sounds lame, it feels like a festival) meant to inspire and teach and everything in between. Growing directly from the always excellent Flash On The Beach (RIP) it's now become an enormously varied meeting of disciplines across everything from illustration and design through to technology and science.

I definitely have to draw special attention to the opening credits to the event, created by From Form. The insane contraption they made was on the stage for the whole event, and it's a thing of beauty. Check it out:


I managed to catch a ton of sessions, and I couldn't possibly cover them all. Seeing the likes of Mr Bingo, Gmunk and Signalnoise is always a pleasure, but the ones I really enjoy are the ones that catch me surprise or doing something completely new and interesting (not that those others don't, but you know what I mean, right?). Anyway, here are some of my highlights (in no particular order): 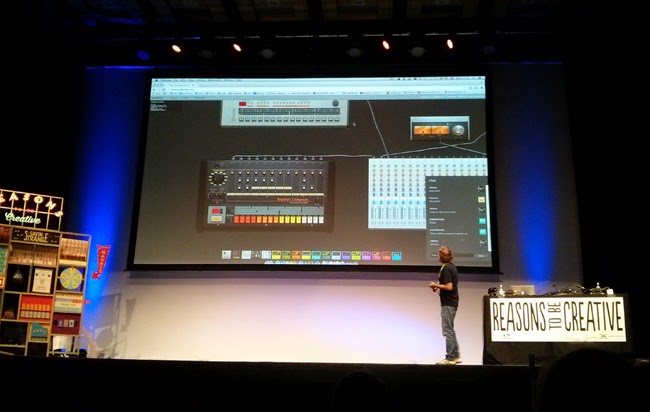 Andre went through some of the amazing new work on Audiotool, including some killer multi-user collaboration that blew everyone away. It was especially interesting seeing this session - Andre was speaking at the first FOTB I'd been at, showing off the Flash version of Audiotool, which is soon to become a thing of the past when the HTML5 version drops. I was quite amused to hear how they're going about porting the whole thing - actually porting everything to Java and then running it through a conversion tool, ultimately using JS as "bytecode" (his words). This is very similar to the approach I take with Haxe, and it's very interesting seeing the idea applied to such a huge piece of work. Apparently you can write in JS nowadays, but who would do that? :D

Also, a huge thanks to Andre (and Audiotool artist Luxior) for the completely amazing track I was allowed to sample for my elevator pitch - it was perfect for what I needed and really added a lot to my three minutes. :) 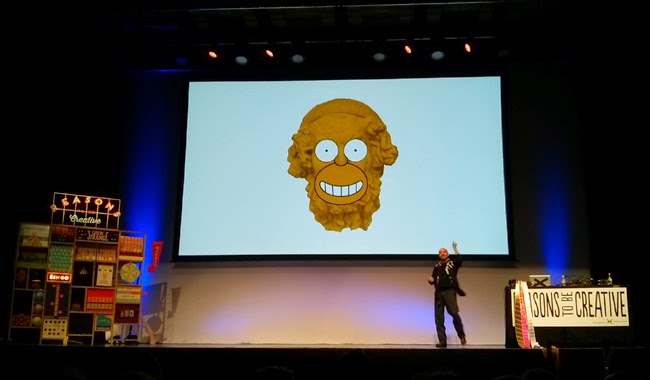 This talk by James Victore was one of the most creatively inspiring ones I caught - it wasn't specifically his work that grabbed me the most (although this was absolutely stellar), it was more just his fantastic attitude to, well, everything. He did a late session and woke everyone up by spending the whole thing bouncing around and firing excited enthusiasm out of his eyes at everyone. This is exactly the kind of thing I want from Reasons - people who love the shit out of what they do, whatever it may be, making me want to go and do the same. James has an amazing Youtube series called Burning Questions that I'd heartily recommend checking out too. 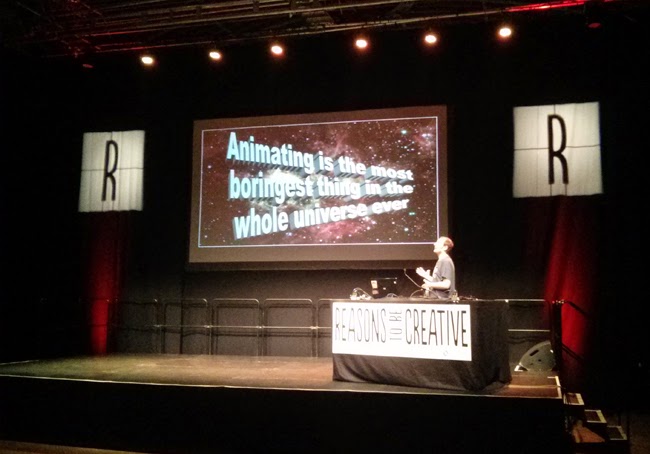 I've somehow managed to be at two or three things that Cyriak has spoken at over the last few years, and missed him every time. I'm glad I finally caught him, as his session was absolutely unreal. I've been pointing at my screen and laughing (in a good way) at his work for as long as I can remember, and seeing him break down some of his more recent work was a rare pleasure. I know him best for his outstanding contributions to GIFs, but his music videos are fucking mental (both creatively and in terms of complexity) - he showed off both his work for Bonobo and also that bonkers Bloc Party video he made, both of which were off the charts in terms of sheer stuff happening. If there's a Guiness world record for After Effects layers, it must be hanging in Cyriak's house somewhere.

The thing the resonated most with me was that he's never seemed to let lack of 'proper' knowledge get in the way of doing amazing work - the impression I got was that he seems to just grab software/tools/stuff by the face until he wrestles it into doing what he wants, even if the approach isn't really by the book. I really really get this - I don't feel like I've ever done things the 'right' way (I'm OK with it) and it's nice to know other people are doing pretty well with it. For me: if it works, you're doing it the right way. 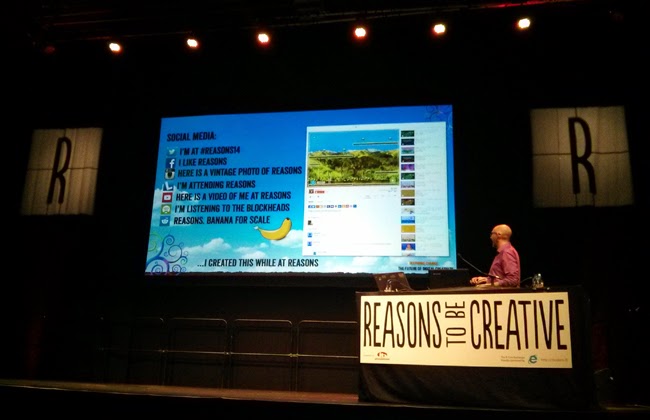 OK, I'm massively biased here as we work together, so I'll just tip my hat to Jon's extremely brave use of audience participation, and his banana-for-scale reference. The three other redditors in the audience all approved heartily. 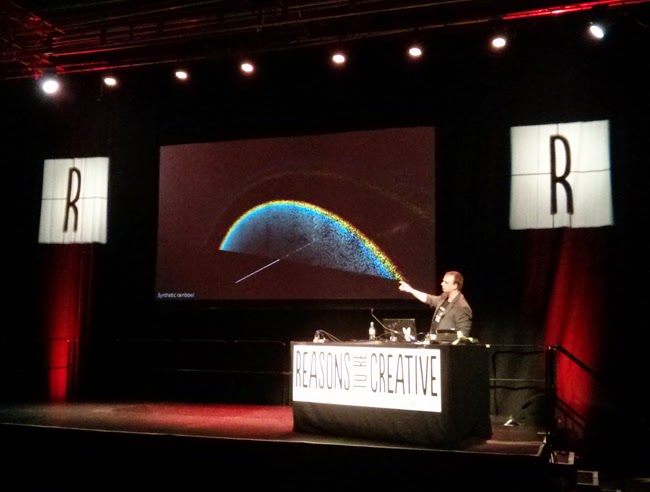 Contrary to the photo here, Frederik doesn't actually shoot rainbows out of his fingertips - however he does do a mean line in creative-coding-meets-science wrapped up in comedy genius deadpan delivery. Frederik is medical radiation physicist PhD and creative coder, and creates wonderful generative images using mostly Processing (and SCIENCE!). His talk took us through everything you could every hope to know about rainbows (ask me about rainbows, seriously) with some fantastic simulations, as well as showing off some absolutely amazing examples of his work - if you get chance to see him talk, do so immediately (especially if you don't know much about rainbows). 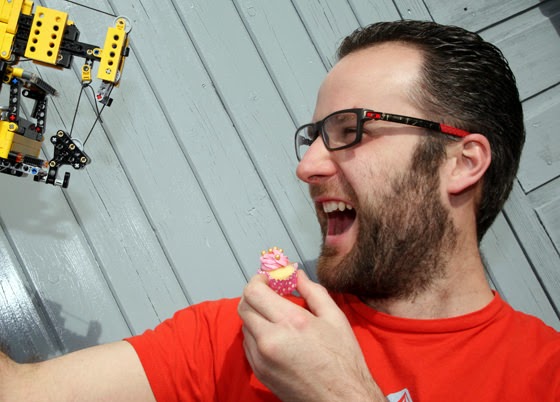 I didn't get a photo of Jop's session due to a dead phone battery, but it was hugely entertaining! Jop is a returning Elevator Pitch champ from last year, and delivered a hilarious and very clever talk around gaming principles applied to all sorts of applications. Jop's work is particularly relevant to my work - he does a lot of really creative stuff in the children's space, and makes really exciting squishy interactive work across a huge range of areas. He's also tough enough to test his stuff with the most brutal testers in the world - his own children. Brave man indeed.

It was particularly cool seeing Jop's session knowing that he'd gone through the whole elevator pitch terror last year, and emerged from it with a slick session that was easily one of the best of the conference. It was also really reassuring getting to hear Jop's advice to the elevator pitchers before we started rehearsals. Thanks, Jop! ^_^ 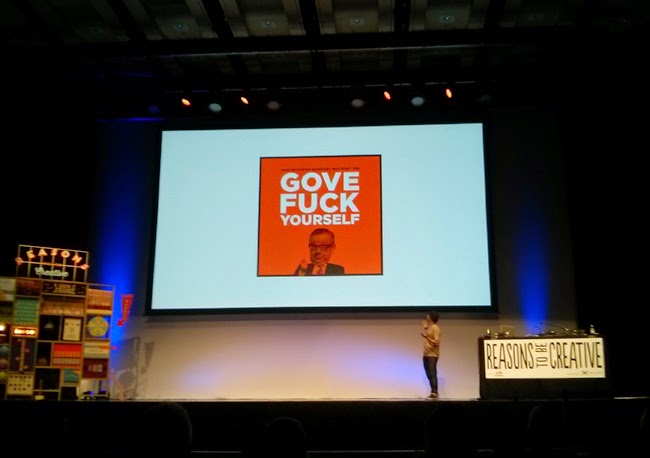 Definitely (and by some margin) my favourite talk of the event. Gav is a senior creative at Aardman, and oh man here is a dude who fucking loves loves loves what he does. The talk was an unpredictable and properly hilarious cannonball run through his work, passions, projects and inspirations. It's hard to add much more to this as I can't really do it justice by writing about it, but if you get chance to see Gav do his thing then drop what you're doing and go. I'm fairly sure you could stop paying him and he'd still show up for work, and his enthusiasm is all kinds of infectious. He's also a fellow jaunty hat enthusiast, so bonus points there too.

Short version? Gav waves his arms about and excitedly talks about art and design in the same way I feel like doing about almost everything I do with code - I can't offer praise higher than that really. Only criticism is that he didn't have enough time, and had to switch up to warp speed towards the end - longer sessions please, Reasons! ^_^

I was lucky enough to be given a slot on this years infamous elevator pitch session, and it was an absolutely amazing experience! It definitely took about ten years off my life in terms of freaking out and panicking, but I would absolutely do it again in a heartbeat.

The format for those who haven't seen it is - twenty people from all kinds of places and industries who feel they have something to show or say. Three minute talks, all crammed into one hour (no gaps in between talks), performed on the main stage on the final day of the event. It's a very very high pressure format, but the end result is a really snappy unpredictable hour of newbies throwing down.

We rehearsed a load of times, starting on the Sunday before the event and ending with a full run-through immediately before the live one. This seemed excessive to me... until we started. Hot DAMN, let me tell you, that shit was scary. This is the view from the stage with the lights up: 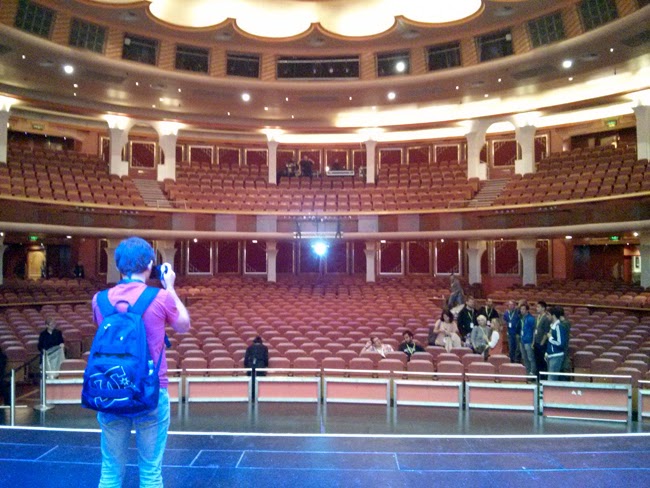 As well as the actual talk, we were also rehearsing the details of getting on and off the stage with all the right kit, in the right order. This involved sitting in a big long line backstage, and getting ready to go on while the other person was finishing. The objective is to have zero space in between pitches, so as one person is talking the next person's kit is being set up by the AV crew, so there's no visible switch. We drilled, and drilled, and then drilled some more - I'm happy to say nobody fucked it up (not visibly anyway!)

I ended up going second, which I think was a very lucky draw - the guy going first has extra responsibility in terms of leading people in and out, but I still get to get it out of the way rather than sweating it out for ages backstage.

My talk was about live coding, using Cyril as a demo but trying to explain what it is as a technique more generally, and hopefully explaining why I love doing it. I really wanted to come out of the blocks on a high and be really memorable, so I decided to do a sort of machine-gun style presentation with tons of bright clear slides, followed by a live demo of something fun and colourful and tactile, over some loud noise.

I also made the decision not to identify myself as a BBC guy - I wanted this whole thing to be about what makes me tick as a creative coder, and not just as an exercise in "hey I'm from the Beeb, let me waffle". I think I achieved this, and it also meant I could be a little more... confrontational (?) on stage and not get sacked - always a bonus.

The live show was terrifying, but in the end I managed to say everything I set out to say, and the code didn't shit the bed, and people clapped. Mission accomplished! The only drawback was that none of the elevator pitchers got to see each other's talks - bit frustrating. We did listen of course, and there were a couple of clear stand-out ones that I voted for anyway. No idea if our votes count, but I'd love to see [REDACTED] and [REDACTED] back next year ;) 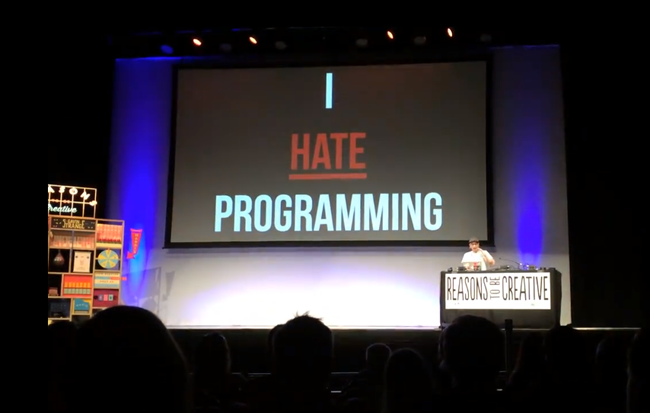 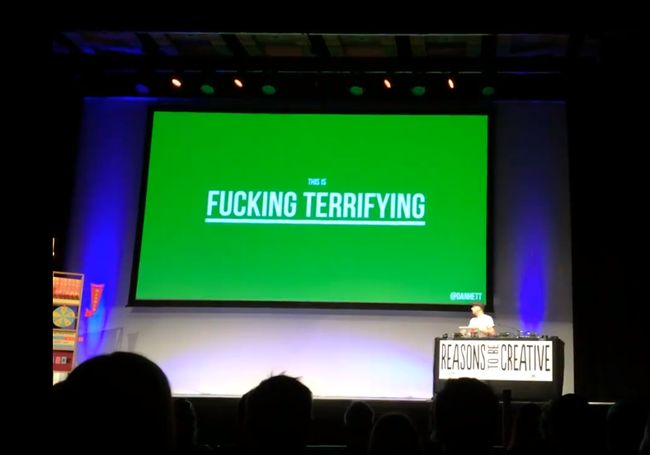 Andre very helpfully got the whole thing on video, which can be found here.

Fingers crossed that people want me back next year - I really feel like I could have a LOT of fun with a bit more time and some big speakers.