For the last few years I've been doing a round-up post at the end of the year (2014, 2013), and this year has been the craziest I've had in a long time. I find it really useful to get things down in review, if for no other reason than it's handy to keep myself in check. Admittedly I almost slacked off this year, but actually more than ever I have an important (and possibly surprising) new year's resolution to set out for 2016. I'll probably miss a bunch of stuff, but here's the gist.

So, the big news then was undoubtedly the arrival of baby #2 - Edward (Eddie) Hett: 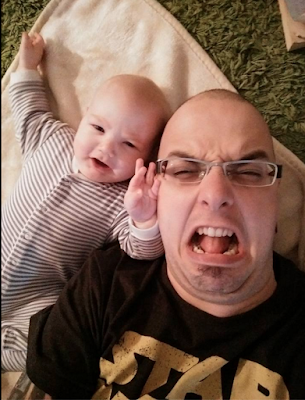 He's now just over five months old, and oh man. What a nightmare he is. Adorable when he's not screaming, but scream he does. We jokingly called Isaac "Hurricane Isaac" for a while, but now we're experiencing Eddie's full force I can see actually we were fairly lucky first time round. This is of course also factoring in that we're much better equipped for baby shenanigans this time around, and he's STILL crucifying us... we're done at two though anyway, no fear. Meanwhile Isaac is approaching three, and he's hilarious and bonkers in the same way that all toddlers are hilarious and bonkers. Never a dull moment in the Hett household, I can tell you that much.

Work-wise I also had some seismic shifting happen - I left BBC Children's after three years, to take a six-month placement position as a Technologist for BBC R&D. Anyone who's followed me or my work in any capacity over the last few years will hopefully immediately understand why I jumped on this opportunity, the role in R&D is me to a tee. I jumped right in at the deep end on a fascinating nearly-live editor project, and it's looking like the interesting work will continue into 2016. I'm reasonably sure this position will become a full-time gig, although I won't celebrate until I know for absolute sure of course. It was rough leaving Children's after having such a good time there, but this was too good to pass up. I'm having a lot of fun so far anyway. 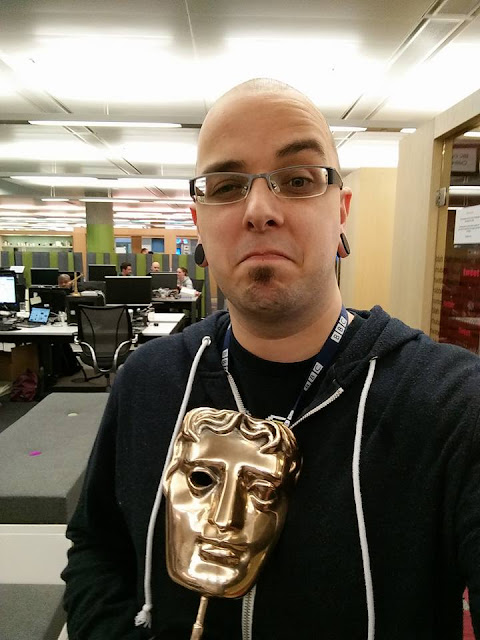 OK well the real story is that Storytime was nominated for a BAFTA, but was beaten to the punch by the (very awesome) Dumping Ground app. Now, I was technical lead on the BBC for that project too, so technically I was on the BAFTA-winning team, but... you know. My code didn't win a BAFTA, so I feel like a mild fraud saying I won a BAFTA. Well deserved for the DG guys though, check the game out here or in the app store. And I'm still putting it on my C.V, fight me.

Outside of my day job I had an absolutely ludicrous year in terms of talks, gigs and all sorts. I'm going to list this fairly bullet-style with links, not in any particular date order or anything; I've not got all night to write this!

The Cornerhouse project I mentioned precisely one year ago came to fruition, and turned out wonderfully thanks to some sterling work by everyone involved. Here's what it looked like:

Building the Scribbler was a great (if mildly stressful) experience, and working alongside so many talented folk on such an open brief was one of my highlights of the year. You know who you are!

I did a whole bunch of talks this year:

The biggest by far was BLAB at the Deaf Institute - I was supposed to be one of three speakers that night, and first on, and ended up doing the final talk of the night for nearly an hour to a packed-out house. Terrifying experience but turned out really well. It all got caught on video too (beware it's a bit sweary, and an hour long almost):

Quite recently I also did a session at Code Mesh in London - this was scary in it's own way, mostly as the crowd was a very very technical one compared to the more creative end I usually speak to. Luckily it was only a smallish crowd, and people generally got it - feedback was good anyway. This one also got recorded:

Other sessions and workshops I did this year:

Performance-wise I was also crazy busy this year. I've been doing bits and pieces of live visuals work over the last few years but really ramped it up this year. In fact, this was one of my 2014 resolutions: nailed it.

The big one was Superbyte Festival, which was a shitload of fun. I did the launch party last year and they invited me to do visuals on the main stage this year, which was lovely. The night was amazing, and fell on my 30th birthday night too! It was quite an experience having the whole place sing happy birthday. The set went well too, a good mix of gifs and smushed-up glitch coupled with a lot of livecoded pixels all over the show: 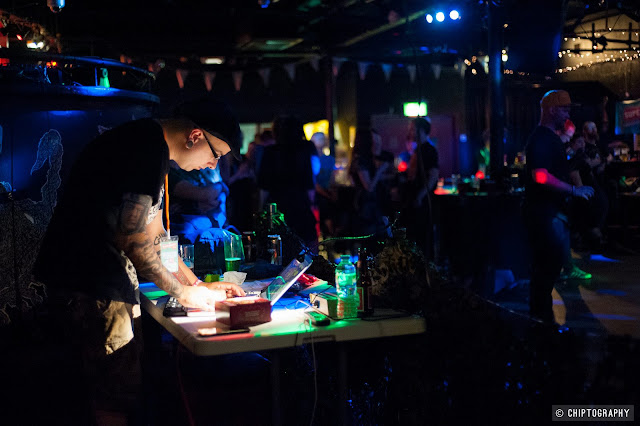 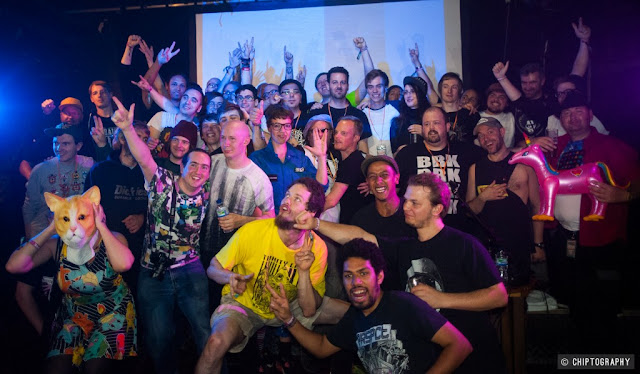 I did a bunch of other chip shows this year too: 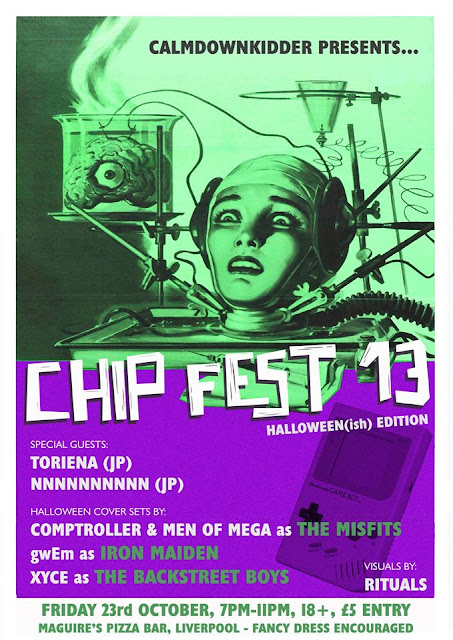 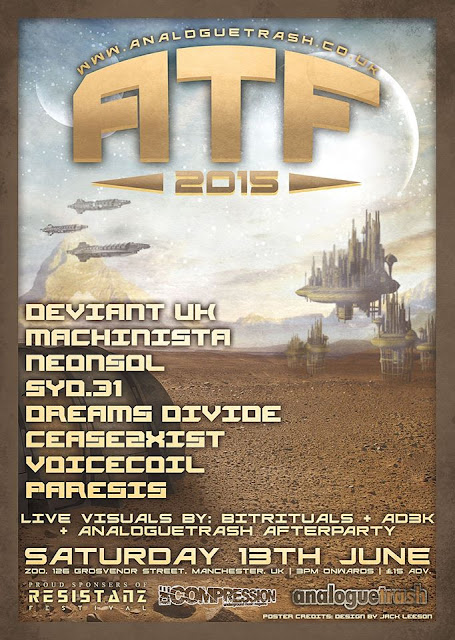 This was way outside of the stuff I usually do, but was tons of fun. ATF was much more about set bands and performers, and I did five completely different sets for Neonsol, Paresis, Dreams Divide, Cease 2 Xist and Voicecoil. These were all wildly different sets, all much more heavily video based. Compared to my usual fare this took a lot more prior preparation, with some very light touch livecoding for logo and typeface elements. More images here, but as an idea: 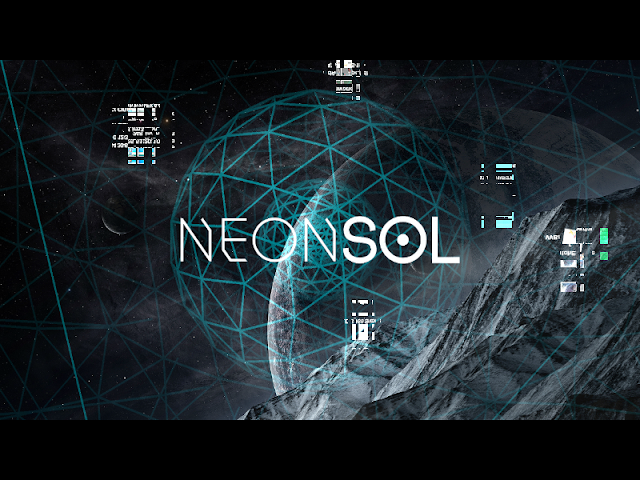 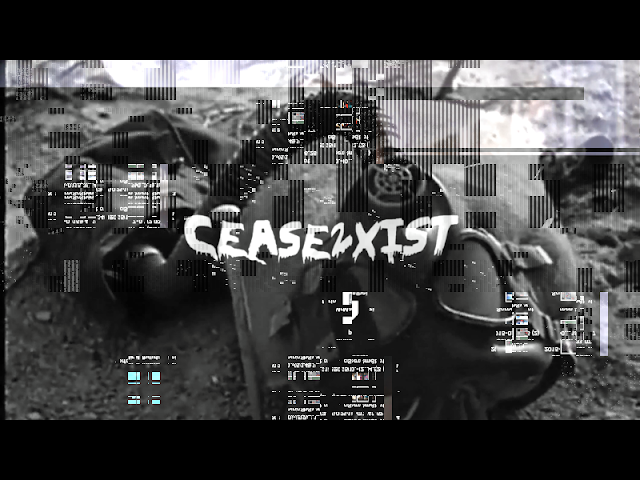 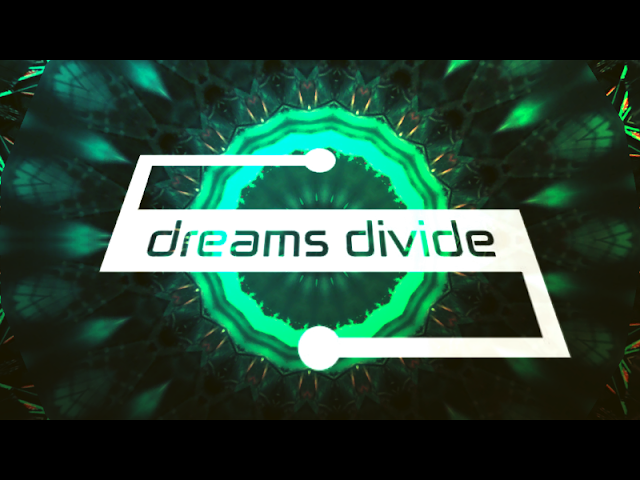 Last but not least I was involved in a whole bunch of Algorave events this year, which were definitely among some of my highlights as always. I did a glitch/livecode session at Connect The Dots Algorave, playing with Hellocatfood in a weird two-projector setup where we merged our visuals together: 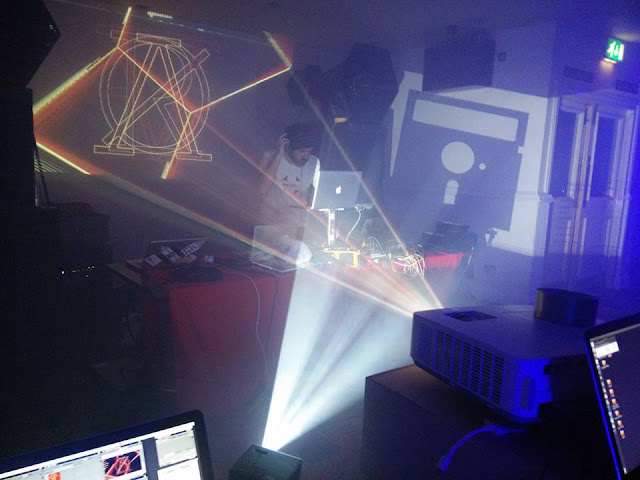 Following that I played (and organised) the Manchester Algorave, at the incredible Texture in the northern quarter. Their whole place is geared for rich A/V experiences, and their combined projection wall was an absolute beast, 10x3 meters I think? Here's the setup without anyone in it: 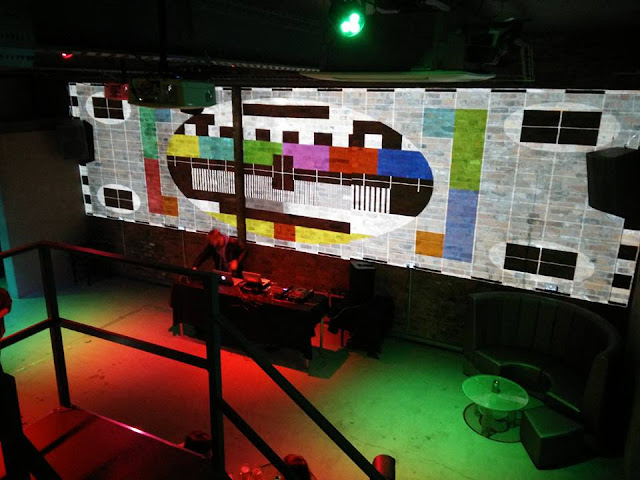 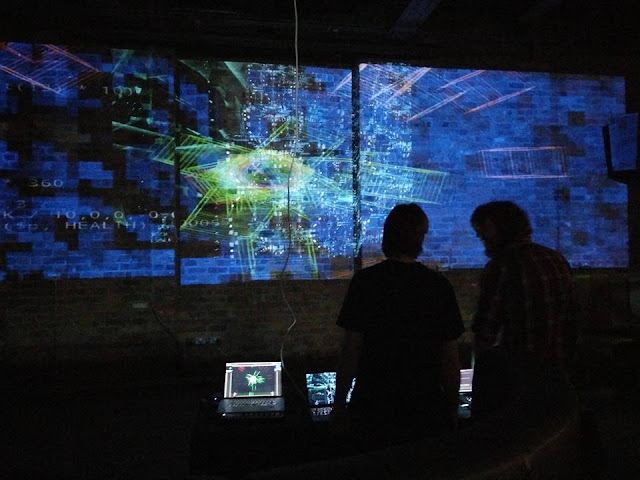 This was a lot of fun to play, and felt massive in scale compared to some of the other Algoraves I'd been at or seen. Different vibe entirely compared to a sweaty basement show, but really enjoyed it.

I also did a set at Texture as part of their first Test Card event, a sort of showcase/jam for visualists on their amazing setup: 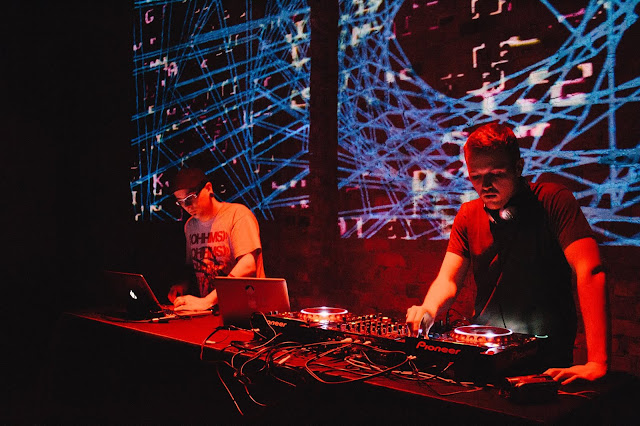 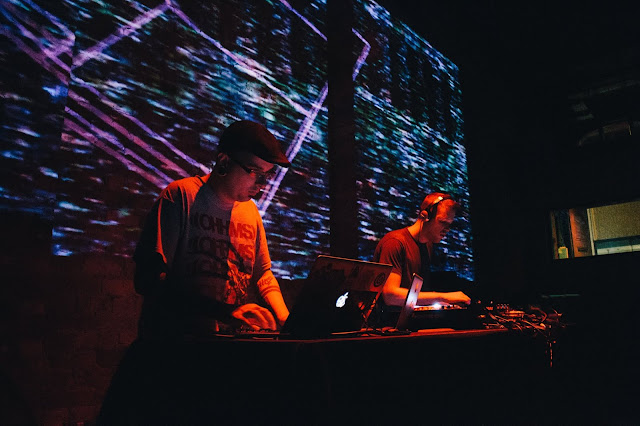 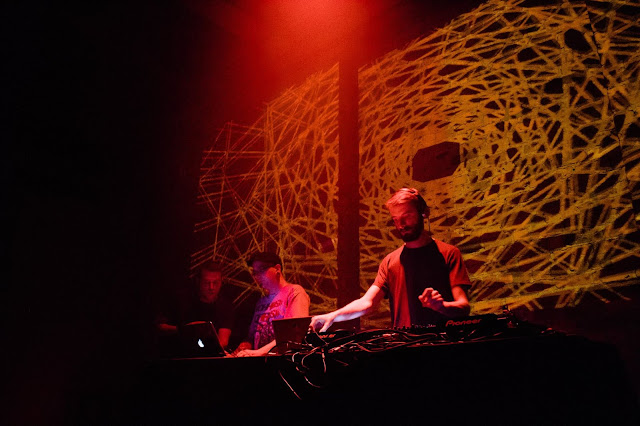 Most recently I played the London Algorave, which couldn't have been more of a contrast compared to Manchester - it was at Power Lunches in Dalston, in fact we were their last proper booking before unfortunately closing down for good (not because of us, honest). This place was low and dark and sweaty as hell, and was a really fun night: 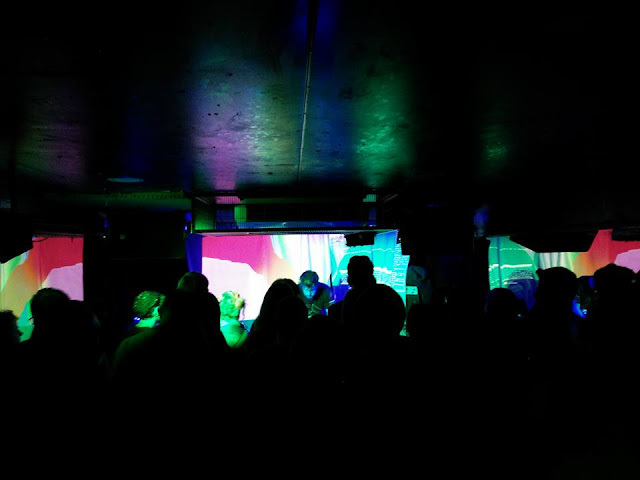 Hellocatfood was also on visuals, but we alternated this time. We also had Dario (lazersausage) do a guest spot on visuals, as well as doing an amazing Tidal set and destroying the place (that's him in the picture above). 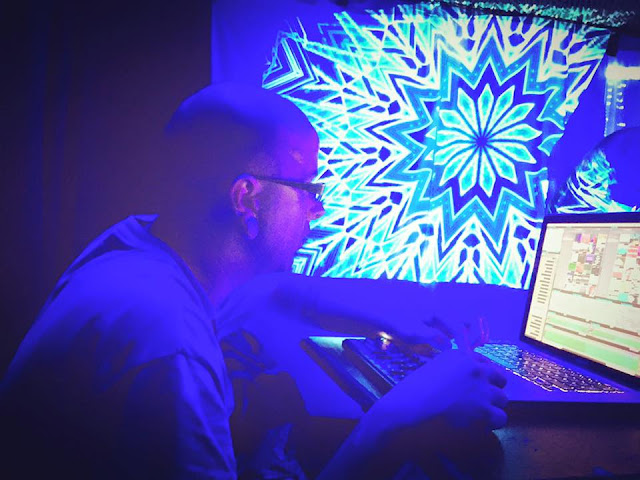 The final big thing I got up to in 2015 actually spawned from all the live work I've been doing - this year I put out my first print pieces, based on my live performance visuals. I've written in more detail about all this here, but broadly I've been capturing imagery as I play, and this capture is then turned into A2/A3 print pieces that represent a five minute snapshot in time. They look like this: 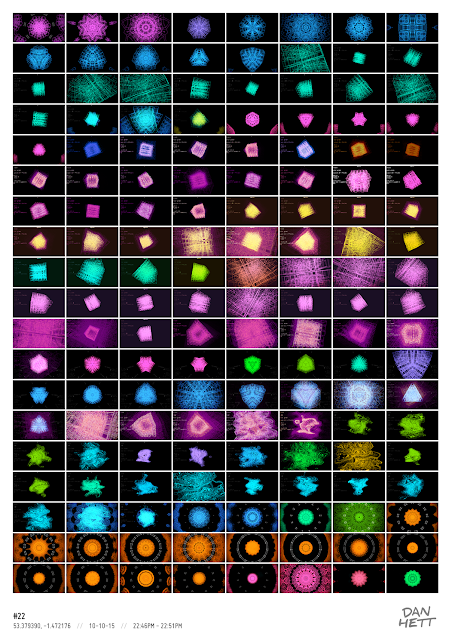 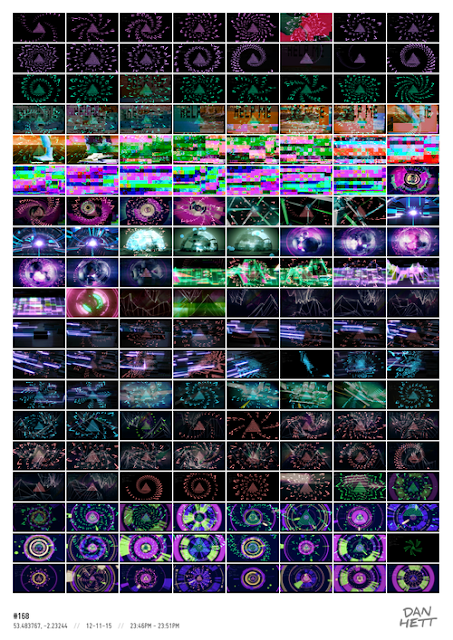 You get the idea. I've been selling them via an online store on Tictail, and it's gone fairly well given they're fairly niche and specific in terms of what they represent. My plan is to do this for every live set I do now, as long as it's interesting subject matter - pure video sessions would be quite repetitive in this format, but certainly for livecoding stuff that constantly changing over time the effect is quite nice. I've also been sharing the source imagery online, something like 15GB and counting, which I've put on Flickr under the Do What The Fuck You Want To license of course. There's a post here with the details, or the whole image set can be found here.

My artwork even made it onto an album cover, Anny's absolutely banging Piston LP: 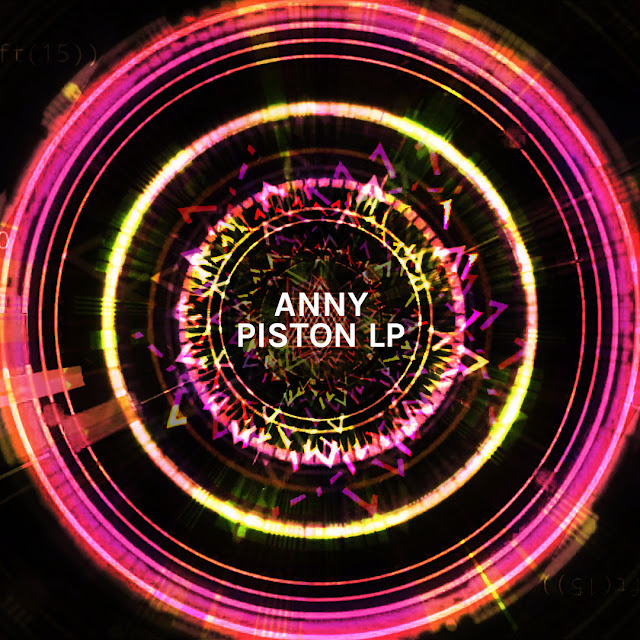 Oh, and I had one included in an exhibition as part of the Manchester Molekine project (check it out here), which I was part of this year, so I'm putting "artist" on my CV properly now: 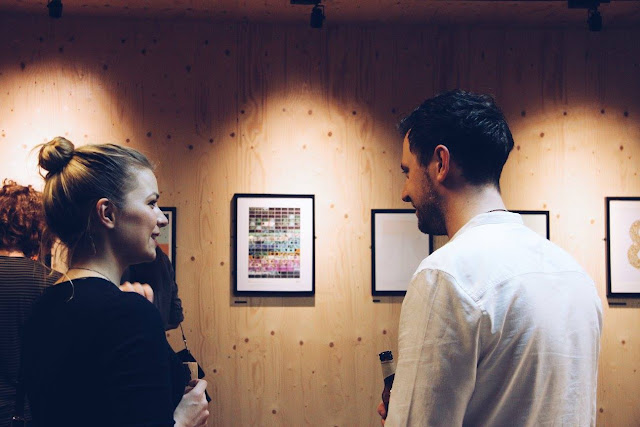 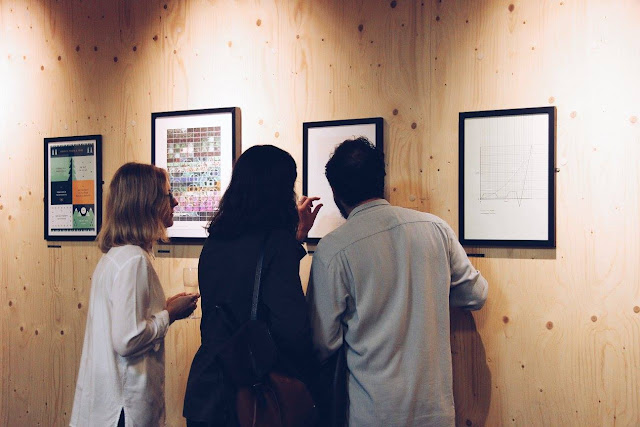 OK, so that was 2015. Between babies and gigs and projects and work, it's been almost ludicrously busy.

So what about next year?

Next year I am doing comparatively nothing.

The truth is: I'm pretty burned out.

For the last few years I've been grabbing every opportunity by the face and saying yes to everything, and it's been great in terms of doing so much exciting creative work and meeting so many amazing, talented people, and getting myself out there and all that jazz.  I'm still at the stage in career/creative life where this stuff is definitely important. However, it's not tenable right now - not just in terms of my own sanity, but also in terms of my small humans and my ladyfriend who has to put up with me running around all over the place and working through the night on things and being a completely stressed-out mess of a person half the time. Not just that, but I've managed to land the R&D thing and I don't want to end up risking that by being so destroyed all the time - of course all the extra curricular stuff keeps me keen, but the balance has tipped a little too far at the moment.

I'm not saying I'm going tools-down or anything, at all. What I am definitely saying is that I'm cutting right back on everything at least for the next few years while the kids are young and I'm focusing on day job and my wife is getting back on her feet after maternity leave.

I'm realistic about it of course, there's still some rad things on the cards for next year - my print work has led on to a huge amount of ideas and concepts that I'll be fleshing out and making, but there's no rush on this and I'll be doing it slowly as and when I feel I can. I've also got a few talks and things lined up for 2016 - there's one absolutely massive one in particular that I'm not allowed to talk about just yet which will be by far the biggest thing I've done. They're flying me out to it, I can say that much...

I'll also still be making and learning and everything else, I just intend to slow life down a little and really just do things for the love of learning things rather than having to freak out over deadlines, or (eww) the money. For instance I've been making lots of noise with live code (via Tidal and Sonic Pi), and this is something I intend to do more of this year, but unlikely in a performance setting. I just want to learn. The same goes with my piqued interest in chiptune: I've been immersed in the scene for a few years on the visual side, and now I'm learning LSDJ and few other things, just for the fun of learning new stuff. I even treated myself to a new toy, via the ever-amazing Joe Bleeps, isn't it a beaut? 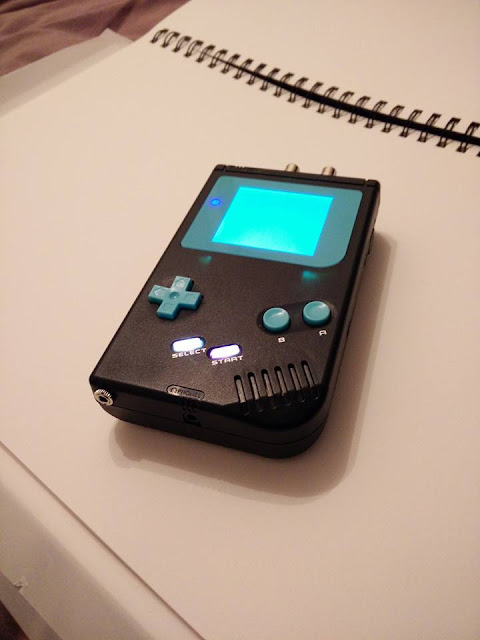 So that's the deal then. Unless someone's paying me a shitload of money, or it's something I can do infinitely slowly from the comfort of my own office, then chances are I'm saying no for the time being.

I'm not used to doing comparatively fuck all, and I can't wait.